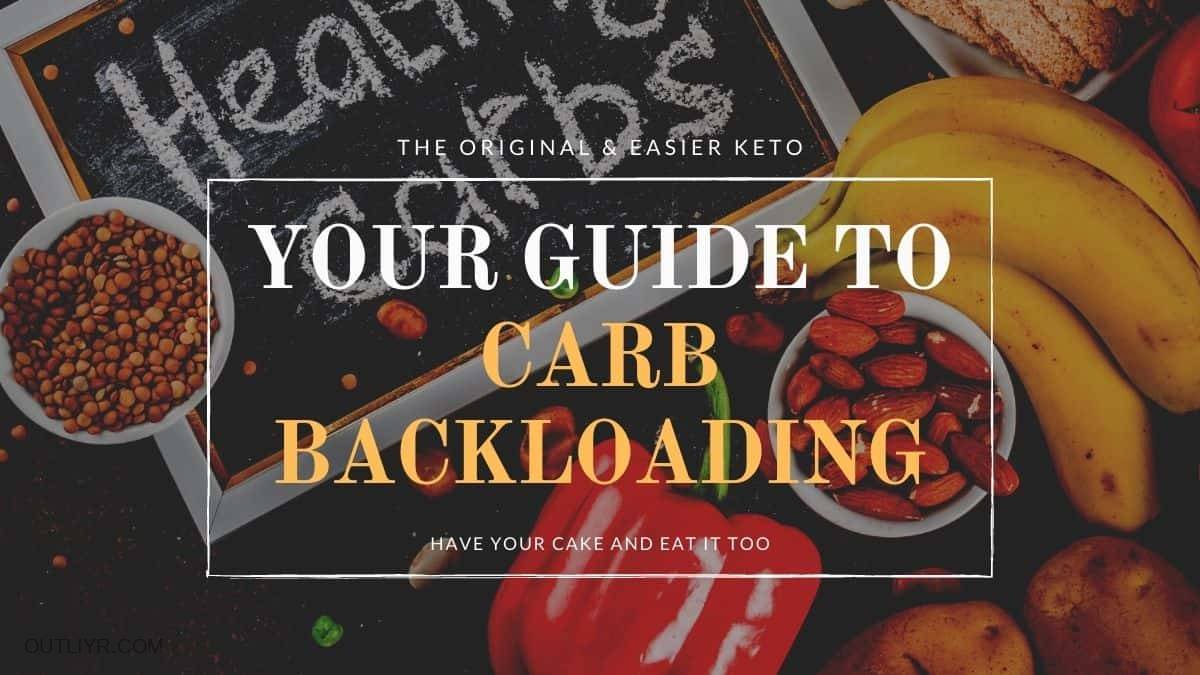 I’m talking pizza, ice cream, and all the packaged snacks you can get your hands on.

Not that I’d recommend those foods, but carb backloading (CBL), or its cousin “carb nite”, promises exactly that. The ability to chow down on junk food without the guilt.

Carb backloading is the predecessor to the ketogenic diet which includes daily post-training carb refeeds. Carbs of any type. Click To Tweet

By taking advantage of the body’s normal hormonal fluctuations, CBL proponents lean out, lose fat, and build muscle while keeping their favorite junk foods. In this post, I’ll cover everything you need to know to get started backloading carbs and the hacks to make it even more effective.

Carb backloading is a dietary approach that advocates carbohydrate consumption late in the day, usually dinner. The concept is similar to a cyclical ketogenic diet that recommends eating carbs at night after exercise. Unlike restrictive low-carb diets, carb backloading permits junk food.

John Kiefer, a nutritional consulting to athletes and bodybuilders, popularized backloading carbs. All his clients had to do was delay their carbs and they saw great results. John didn’t pioneer CBL though. Arnold Schwarzenegger intuitively stumbled upon the tactic in the 1970s and used it to great success.

As my first foray out of the Standard American Diet, I found CBL in 2014 through online communities like Reddit and Bodybuilding.com. I immediately put it to use. I packed on muscle and cut body fat without additional effort — just by changing the timing of my carbohydrate intake.

No matter what I try, I feel best backloading my carbs.

First of all, surprisingly there’s not much research on carbohydrate timing. Despite a plethora of users reporting great success, few studies have elucidated the mechanisms behind why it works so well.

I, and others, have theories:

And it’s one part of a complex morning hormonal ecosystem.

Another, the primary stress hormone cortisol, naturally spikes in the morning. It burns fat in the absence of insulin.

Together, high cortisol with high insulin shifts the preference towards fat storage instead of burning. Dr. Berg explains the relationship below:

A simple carbohydrate called glycogen powers your muscles, liver, brain, and other organs. They each have their own reserves, almost like a backup power generator.

Come morning, they’re on reserve. Your body ramps up its ability to tap into body fat and alternate fuel sources. One of which is a form of clean-burning energy called ketones.

This is one enzyme responsible for burning fat.

As I mentioned, by the time you wake up from a full night of sleep you’ve burned through your carbohydrate stores. When that happens, hormone-sensitive lipase (HSL) automatically starts converting body fat into fuel. The process continues until HSL goes down.

Eating carbs (spiking insulin) is the fastest way to shut down the fat-burning enzyme hormone-sensitive lipase. Now you’re unable to access the tens of thousands of calories you’re carrying around with you as body fat.

All the new diets, terms and buzzwords get confusing. CBL shares a lot in common with recently popular diets.

No restrictions on carb timing

The original low-carb cyclical ketogenic diet with a refeed every 5-7 days.

If you choose to have breakfast (intermittent fasting and carb backloading stack nicely), it will be protein and fat.

And of course, any of the million low-carb twists on common comfort foods. Keto bagels, paleo granola, low-carb pancakes to name a few.

How To Carb Backload

Here are the steps to successful carb backloading.

For ten days, aim to stay under 30 grams of net carbs per day. Making the jump isn’t easy.

In order for this program to work, you must stay strict low-carb for the full ten days. Your body will respond by ramping up fat burning machinery. Yes, the only thing more painful than strict low-carb is tracking food intake, but I recommend using Cronometer for the first day or two. That way you’ll get an idea of the carb content of your new staple foods. Some common foods contain hidden sugars, starches, and ingredients that will delay all your handwork.

Count net carbs (total carbs minus fiber). Say an apple had 20 grams of carbs and 4 grams of fiber. That’s 16 grams of net carbs.

This is the same initial adaptation process as going keto. And unfortunately, it comes with the same side effects. If you experience low-carb keto flu symptoms, be sure to get extra electrolytes. You need more when low-carb, especially salt. Commonly-reported fatigue and haze will go away.

You’ve made it through the hard part.

Today, move your training up a few hours. The late afternoon or early evening works best. You’ll want the extra time to enjoy and digest.

Celebrate with a nice, large treat meal. Arnold and John Kiefer both prefer the high-glycemic, sweet, starchy carbs to refuel empty muscle stores. Eat as much of whatever as you want. No-holds-barred.
Refilling glycogen stores revs up the metabolism and improves athletic performance.

Note: notice the effect junk food has on your energy the following day.

This is the cruising stage. Carb backloading becomes automatic and feels good.

Stay low-carb on rest days. But on training days you can incorporate some carbs back into your dinner. Don’t go quite as wild as the initial refeed though.

You’ll sleep better and normalize hormones by adding some carbs to dinner.
I’m able to stay in a mild state of ketone-fueled productivity around the clock despite chowing down on carbs. Additionally, CBL made my transition into OMAD considerably easier.

Many people today use CBL without knowing the name.

It’s a form of the cyclical ketogenic diet with nightly carb refeeds after exercise.

I’ve used it to stay lean year round, and have heard many success stories from others.

At the end of the day, I believe that overall energy consumption (calories), macronutrients & phytonutrients matter more than specific carbohydrate timing. For those doing everything else right, carbohydrate backloading could be just the push necessary to break plateaus, set personal records, or resume stalled weight loss.