3 Costly Breathing Mistakes (and How to Fix Them) 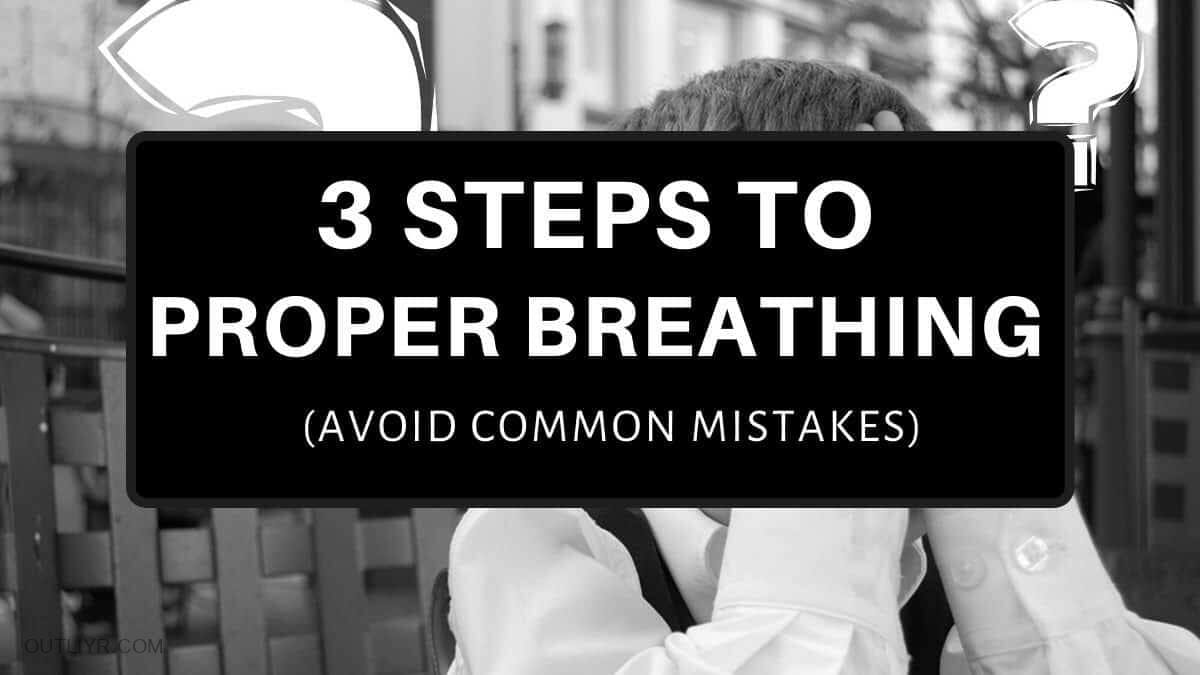 Table of Contents Show
How to Start Breathing Properly Today
1. Breathe Through the Nose
2. Take Fewer Breaths
3. Inhale From Lower
The Science Behind Proper Breathing
Heavy Breathing Deprives You of Oxygen
Should I Ever Mouth Breathe?
How Do I Know If I Am a Mouth or Nose Breather?
Follow Our Ancestors Lead

You make the same mistake thousands of times every single day. It takes time to overcome decades of habit, but learning proper breathing can change your life in spectacular ways.

How to Start Breathing Properly Today

On the other side of mouth breathing lies greater energy, productivity, focus, quality sleep, and even exuding radiance.

Hard to imagine all that from something so basic.

Altering automatic behaviors such as breathing takes conscious effort. I recommend setting a few reminders throughout the day to keep you on track.

1. Breathe Through the Nose

“The nose performs at least 30 functions, all of which are important supplements to the roles played by the lungs, heart, and other organs.”

30 plus functions that mouth breathers forfeit, including:

Infants innately know to breathe through the nose. Unless you have a nasal obstruction, make a conscious effort to keep your mouth closed throughout the day. Eventually you will naturally begin breathing through your nose.

Counterintuitively, taking more breaths actually decreases the amount of oxygen delivered to tissues throughout your body (see below for more details on the science).

Think of hemoglobin as a locked doorway. CO2 unlocks the door, allowing oxygen through.

Without enough CO2 in the blood, lungs full of air do no good.

Overbreathing expels too much CO2. In the above example, it is like removing the key and the door locking again. The medical community calls this hypocapnia. As cardiologist Dr. Claude Lum put it:

“Breathing too much presents a collection of bizarre and often apparently unrelated symptoms, which may affect any part of the body, and any organ or any system.”

Without sufficient oxygen, muscles and organs do not work properly. Symptoms can range from gastrointestinal, cardiovascular, and respiratory problems, to extreme fatigue.

How to breathe less:

Pay attention to the origin of your breath as you slowly exhale through the nose.

Only inhalation through the nose activates the diaphragm, a muscle used to completely fill the lungs. Without use the diaphragm atrophies, leaving you with less oxygen carrying capacity.

How to abdominal breathe

Drop the shoulders and optionally close your eyes.

Gently rest your hand on your stomach.

With each successive breath, focus on starting the breath from lower than before. Your stomach should noticeably balloon full of air, and then flatten on the exhale.

Do not get discouraged if you do not get it immediately. Abdominal breathing gets easier with practice.

The Science Behind Proper Breathing

Your brain and body require oxygen to operate.

The lungs diffuse oxygen from inhaled air into the bloodstream. From there hemoglobin, the oxygen-carrying component of blood, transports oxygen to your tissues. Higher CO2 in your blood “unlocks the door” for hemoglobin to deliver more oxygen to tissues.

Finally, you exhale a portion of that CO2 back into the atmosphere. The process repeats with each breath.

Understanding the necessity of the mistakenly vilified carbon dioxide is key to understanding breathing.

Heavy Breathing Deprives You of Oxygen

A scientist named Christian Bohr discovered the above phenomenon in 1904 which explained how hemoglobin releases oxygen to cells. His experiments established CO2 level as a major tissue oxygenation factor.

More carbon dioxide in the blood leads to greater oxygenation throughout the body.

Your heart and brain consume a lot of oxygen. Deprivation hampers blood flow. In his book The Oxygen Advantage, Patrick McKeown describes the consequences (emphasis mine):

“In general, blood flow to the brain reduces proportionately to each reduction in carbon dioxide… It is well documented that habitual mouth breathing during waking and sleeping hours results in fatigue, poor concentration, reduced productivity, and a bad mood.”

Anesthesiologists sometimes set respiration machines to a pattern that induces oxygen deprivation. They praise over-breathing as a “magical” tool to sedate the brain so that it needs less anesthesia.

Yikes. Great for surgery, not for peak cognition.

But mouth breathing has a time and place.

Should I Ever Mouth Breathe?

Something dangerous in large amounts can have benefits in smaller doses (a concept called hormesis). Exercise, for example, stresses the body in the short-term causing it to rebuild stronger. Temporary mouth-breathing acts similarly.

During breathwork sessions, vitals temporarily decline. My self-quantification devices show HRV and other biometrics plummet only to rebound and later improve above their baseline.

In response to short-lived acute stressors, the body strengthens itself. Over the long term, vitals increase above baseline and you become more resilient.

That said, biologically you don’t need to breathe through the mouth. Outside of those two cases, mouth breathing has plenty of drawbacks:

How Do I Know If I Am a Mouth or Nose Breather?

Do you suffer from any of the following?

These symptoms may indicate mouth breathing.

Uninterrupted bouts of mouth breathing cause the most obvious symptoms. Assess yourself first thing in the morning.

Observation is the first step.

Automatic behaviors die hard. Set a few reminders throughout the day to try the following:

Changing the habit will take some practices, but if the world’s most elite athletes breathe through their nose, what is holding you back?