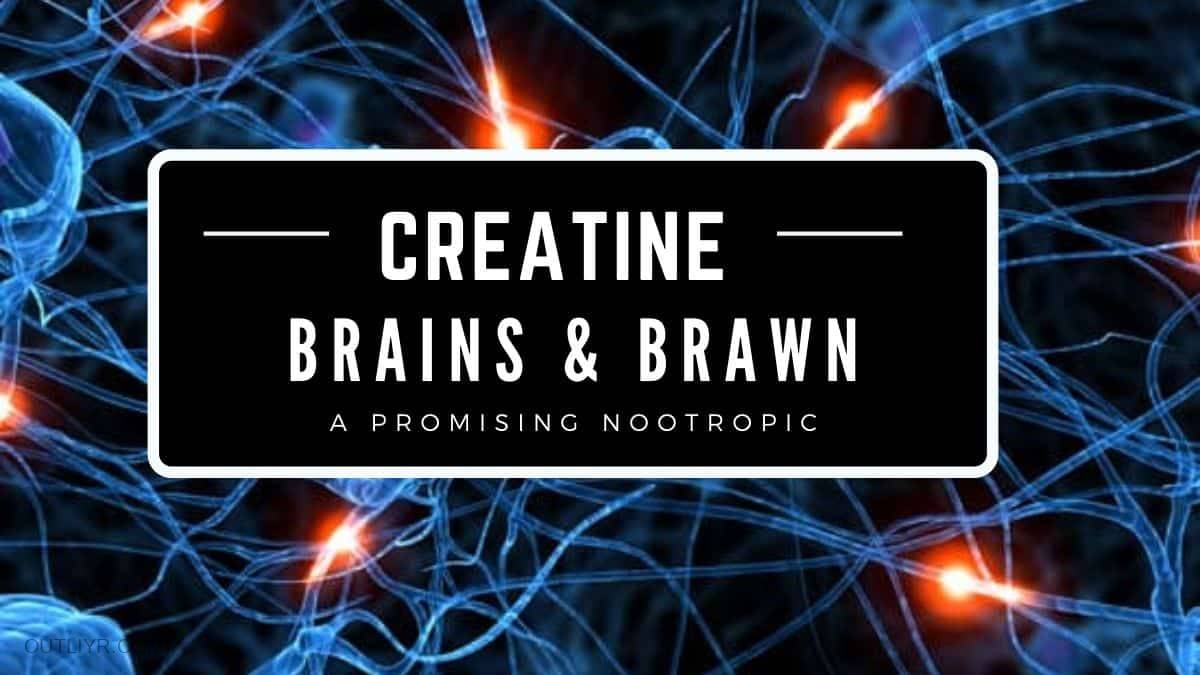 Creatine. The dirt-cheap, safe bodybuilding staple recently gaining limelight for its brain-enhancing properties. What does the word creatine bring to mind?

All of the above are reasons to supplement creatine.

Most of the focus is on athletic performance, but recently the creatine has received limelight for its cognitive-enhancing nootropic effects.

Let’s take a step back. Everyone already has creatine in their body. You wouldn’t survive without it.

Put simply, creatine is a molecule produced from the amino acids glycine and arginine. The liver creates creatine, where it is then shuttled (mostly) to the muscles for energy.

Activities requiring short bursts of physical or mental energy draw on creatine stores for ATP — the energy currency of the body.

Your normal body creatine levels depend on meat and fish consumption, exercise, hormones, and muscle mass.

Read on to learn what creatine can do for you cognitively and physically.

Boasting an amazing safety profile, few side effects, and a number of impressive benefits, creatine offers promise for people in all walks of life.

It does not stop there.

By now most serious athletes know about creatine.

Even endurance athletes get more out of their sessions through increased muscle mass retention and reduced fatigue. During exercise, their short bursts of power improve. Mountain bikers rising off their seat to conquer an ascent, trail runners firing stabilization muscles to cover uneven landscapes, kayakers paddling at just the right times — creatine helps each of these efforts.

Myostatin is a regulator of muscle mass. High myostatin inhibits muscle growth. Studies show that creatine is a potent tool to reduce myostatin and pack on muscle.

“Creatine monohydrate is the most effective ergogenic nutritional supplement currently available to athletes in terms of increasing high-intensity exercise capacity and lean body mass during training.”

Think of a city with an energy shortage. With Google offline, other businesses cannot operate. This is similar to what happens in the brain when energy stores drop too low. Parts of the body get just enough energy to survive, but not necessarily perform at their peak.

When the brain needs energy, it calls for a molecule of ATP. Energy use by neurons strips the ATP of a phosphate molecule, converting it into ADP.

Stable energy is correlated directly with brain performance. Supplemental creatine donates a phosphate molecule so that ADP turns back into the usable (and stable) ATP. In the above example, it is like giving Google power.

Some other cool studies show Creatine can do a lot:

Not bad for a bodybuilding supplement.

Who Should Supplement Creatine?

With such little downside, the benefits of creatine far outweigh the drawbacks.

Most of us get some amount of creatine in our diet from meat and fish.

Therefore creatine supplementation is especially impactful for certain groups lacking it in their diet.

Athletes, vegetarians, vegans and those avoiding meat need supplemental creatine most. Research shows that these groups respond quite favorably to supplementation.

Today you can find countless forms of creatine. Labels on some “advanced formulas” claim to improve absorption, delivery, or reduce bloating. Ignore it.

Almost all research has gone into one old, effective, yet dirt-cheap form.

And in virtually every case this form will do.

Some companies cut corners, add filler, and make inferior products. Check labels for either “Creapure” or “Pharmapure” on the ingredients list to know that you are receiving the real deal — free of contaminants.

Researchers and users alike debate the most effective absorption strategies.

5 grams per day is the recommended dose. Larger doses can cause gastrointestinal discomfort. For optimal absorption, I split this into two doses: 2.5 grams in the morning and 2.5 grams in the evening. Always take with at least 200 milliliters of water.

Creatine absorption does not require carbohydrates (specifically fruit juice) as once believed. The rationale behind mixing creatine into juice was for the insulin spike caused by the juice to drive creatine into muscle cells. I eat relatively few carbohydrates so I never considered drinking juice.

Instead, I time my creatine with a meal high in protein. Like carbohydrates, protein raises insulin but to a lesser extent. Research shows that another alternative would be to combine creatine with another supplement called fenugreek. If nothing else, take it with warm water for a slight absorption boost.

Water retention (bloating), is the number one side effect. Slight weight gain is normal. Creatine encourages muscles to store more water. More water means better nutrient delivery. No need to fear though. Water retention, bloating, and weight gain all go away when you stop taking it.

Healthline explains that other rare side effects of creatine use may include:

Stop taking creatine if side effects do not improve or worsen over time.

Does creatine cause kidney damage?

Creatine does not cause kidney damage.

It is safe for healthy individuals at the recommended doses. Those with pre-existing conditions should check with their doctor before adding creatine to their supplementing regimen.

If I eat meat or fish should I still supplement creatine?

Possibly. If you follow a diet rich in meat and fish it is less necessary than someone on a vegan or vegetarian diet. Try creatine for a month or two to see how you respond.

Should I tell my doctor that I am on creatine?

Yes. You should tell your doctor everything that you are supplementing. When your body processes creatine it is known to raise a metabolite called creatinine. If your doctor does not know that creatine may be responsible, they may misinterpret certain blood tests and unnecessarily worry.

Creatine: A Super Supplement For The Body & Mind

Once relegated to strength athletes, creatine has moved into the mainstream.

At a low cost, great safety profile, and wide-spread availability, consider adding creatine to your next supplement order.

What’s stopping you from giving it a shot?