How Plants “Talk” to Humans (The Strange Language of MicroRNA & Exosomes) 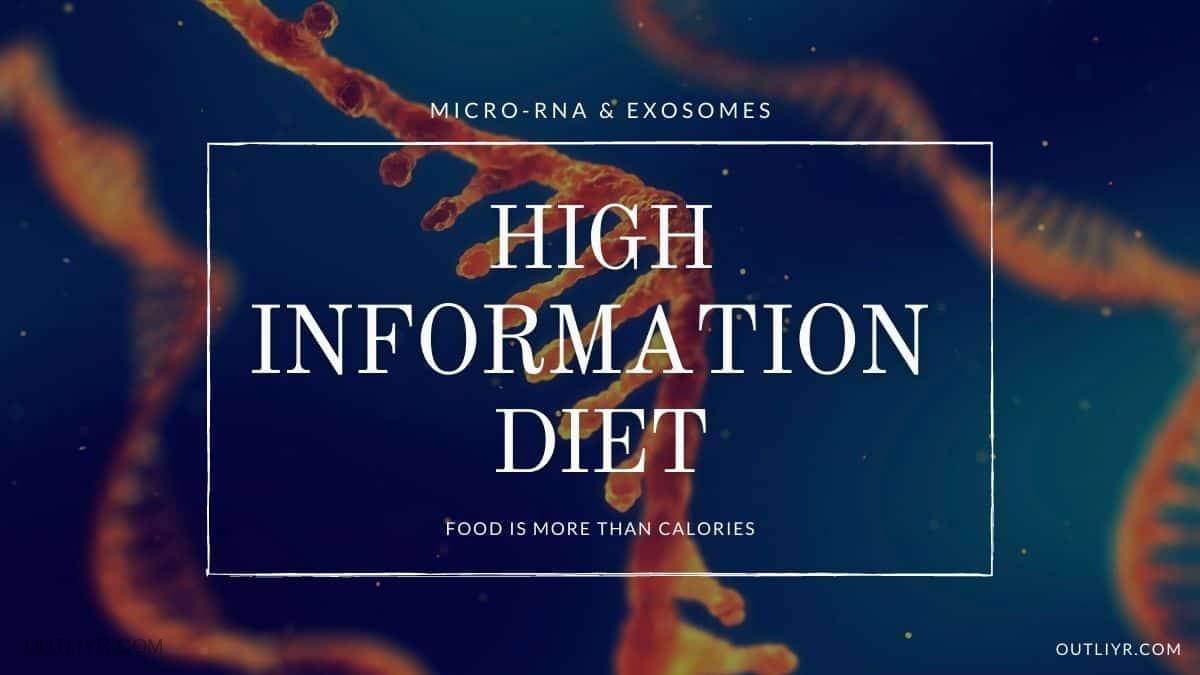 Humans, plants, and animals all share a common language. Information more biologically significant than calories, macros, and micronutrients. Plants, bacteria, fungi, and organisms use this code to exchange data across kingdoms. Soon nutrition labels may reflect this overlooked form of food quality:

Flipping on and off gene expression. Food is information.

Every bite of real, unprocessed food sends encoded messages to your body. What you eat reprograms the human operating system. For good or bad. Today I’ll explain how microRNA and exosomes contained in food profoundly alter your biology more than calories, or nutrients alone.

Your Genes Are Not Your Destiny

Even the “doomed” don’t need to prophylactically amputate body parts to evade disease. Lifestyle can control your genes. Sounds farfetched?

Discovered in the 1940s, a branch of science called epigenetics studied how environment variables flip genes on and off.

Problems when you have certain genes AND act recklessly.

The best summary I’ve heard on the interaction of your genes and environment:

Neither alone is dangerous.

Test your genetics to know risk factors, and then modify your lifestyle accordingly.

Scientists estimated that 97 percent of human genes are junk. And that’s one conservative estimate.

You read correctly, only three percent of your DNA actually contains the code to build proteins and thus life.

In biology, the adage use it or lose it applies to everything. If humans could get by with only three percent of our DNA, you can bet we could have lose the rest quickly.

What does the rest do?

You can think of the other non-coding genes as a library of potentials.

One component of that junk is microRNA (miRNA).

MicroRNA explains one piece of the epigenetic puzzle. These tiny molecules don’t create proteins but reprogram your cells.

That’s where food comes in.

Throughout the history of our species, humans have used food as medicine. Food communicates information from plant to animal.

As its name suggests, microRNA (miRNA) are tiny RNA sequences and they travel around encased in protective packages called exosomes. Think of exosomes as a Jeep, transporting secret architecture blueprints (miRNA).

Exosomes help plant microRNA survive digestion. They pass through the gut and end up in your bloodstream. From there, flipping certain genes on and off. This process occurs with every bite:

“Plant miRNAs can regulate the expression of target genes in animals and contribute to phenotypic differentiation or to the function of tissues/organs.”

Reading the Source Code of Your Food

Common sense says there would be a difference. Sanitary dilemma aside, both nutritional labels would look similar.

The microRNA of the two different crops, on the other hand, is completely different.

"The potential role of food-derived exosomes (FDEs) in alleviating diseases, as well as in modulating the gut microbiota has been shown, but the underlying mechanism is still unknown. Click To Tweet

MicroRNA in the sewage crop survives digestion, enters the bloodstream, and alters the expression of your genes. Imagine that information.

More likely, it informs your body of the terrible conditions it endured. This 2017 study concluded,

“miRNAs are known to play a dynamic role in many biochemical pathways of mammalian’s brain, including neuroplasticity, stress responses, cellular signaling, etc. miRNAs have a role in neurodegenerative phenotype of [Alzhemiers], [Parkinsons] and ALS.

While a dramatic example, it’s not farfetched to assume that the two crops send different signals. The current food system doesn’t differentiate between the two.

Even organic, fair-trade, shade-grown certifications lack miRNA regulation. These merely indicate the absence of several chemicals. Nothing regarding quality.

The above study indicates that poor quality food can directly alter how well your brain works.

And follow-up research has identified systemic changes throughout the body.

Another reason to breastfeed children and avoid infant formula.

It’s not all bad though. An early study found that plant microRNA protected against and inhibited cancer.

MicroRNA research is in its infancy, but your food choices matter more than calories and nutrients.

Tiny vehicles called exosomes carry small microRNA from your previous meal through the digestive tract, and into your bloodstream. There they flip your genes on and off. MicroRNA is one of the oldest protectors against disease. Click To Tweet

The current legislation does not label food miRNA quality. Sidestep the problem with a simple choice. Food choice. Often the cleanest food doesn’t cost much more than conventional. Take any step towards cleaner food:

You wouldn’t risk installing a virus-laden software program on your computer. Similarly, eat clean to provide your genes with the most biologically compatible data.