9 Booze Alternatives That Get You Buzzed (Healthy Nootropics & No Hangover) 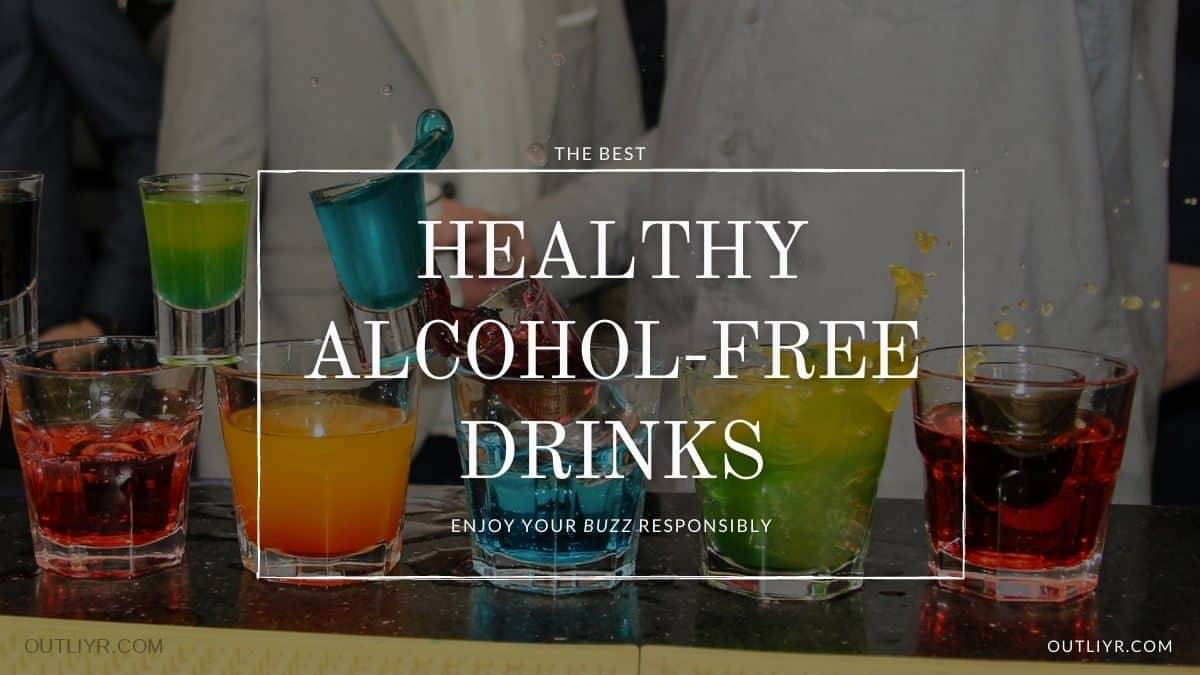 “You won’t take this quadruple shot”.

I rarely turned down challenges.

Especially when they involved drinking. I got good. I’d go to class, football or rugby practice, study, party, and repeat. Several nights every week. I became competitive with my drinking and wore my tolerance with pride:

Over time that all stopped. I finally experienced hangovers. I began weighing the night’s fun against the next day’s pain. Drinking quickly lost its charm.

A genetic analytics tool called SelfDecode confirmed my sensitivity and suggested some things I could do to offset the damage:

Today I still drink, but usually only a cocktail or two. And when I do, I strategically damage mitigate with advanced supplementation and habits.

I missed the social and feel-good parts of drinking. I started wondering how to get a buzz without alcohol. So I got to work. Researching, sourcing, and testing several dozen ingredients. At last, I found healthy alcohol alternatives feel great without draining your energy or the bed-ridden agony of the morning after. These are my go-to booze replacements to enjoy the night without regret.

Certain ingredients induce the same euphoric state, and actively strengthen the brain, without the toxicity of alcohol. #Outliyr Click To Tweet

For more ingredients, check out my thorough list of all the pre-made nootropic brain boosting drinks on the market.

There’s a different option for every goal.

The best non-alcoholic drink that makes you feel great is KetoneAid’s R 1,3.

Other products like Kin Eurphorics, Sun Chaser, and Zenify are good but feel different.

Make no mistake, you don’t need to follow the ketogenic diet to enjoy this rare drink.

Instead of containing the addictive and toxic form of alcohol called ethanol, KetoneAid has formulated something special. The active ingredient, “1,3 Butanediol” (explained later), produces similar a feel but without the drawbacks.

Both the taste and can resemble that of hard seltzer.

In the coming years, expect to start seeing this everywhere among health-conscious crowds.

Half of a dose boosts your productivity, focus, and creativity.

While a full dose induces bliss, relaxation, and the perfect amount of social lubrication.

Each bottle contains a proprietary blend of ancient plants and kava. Along with a touch of pineapple and coconut juice.

The not-so-secret ingredient here is high-quality kava (also called Piper methysticum), which has quickly become a star in the sober community. It also contains a natural pain-relieving (physical and social) plant endemic to Asia called kratom.

You’ll feel Feel Free kicking in about 5-10 minutes after your first sip, with the primary active ingredient (kavalactones) working in the brain before the body. This has been my experience:

You get the feel-good effects of alcohol, without slurred speech, brain fog, or poor decision-making. Note that, due to the kratom content, I don’t recommend this drink for anyone with a history of substance issues. For maximum potency, Feel Free shouldn’t be a daily drink. Or at the very least, no more than one per day.

Save 40% with the exclusive Feel Free code URBAN40

The original nootropic booze alternative, Kin does all the heavy lifting for you. Each Kin Euphorics product contains different ingredients tailored to your use:

From brightening mood, to sleep, to relaxation, Kin has crafted something for every occasion.

The bottles are wall pieces and they contain a special formulation of compounds. Their products are for special occasions.

Looking for another done-for-you mocktail? Sun Chaser is a new entrant to nootropic booze alternatives. Their original flavor tastes of fruit and mint, with the following ingredients added:

Or with a little elbow grease, you can make many batches with the following ingredients:

Using five ingredients you can customize your own nootropic beverage as fit.

Match your nootropic booster to a worthy base. For example, the earthy taste of Kava probably would go better with coconut milk than kombucha.

Zenify is a newcomer to pre-made relaxation drinks. Everything about these cans resembles that of your typical energy drink. Where they differ, however, is the way you feel after a can.

The team behind Zenify formulated it specifically to help you relax, de-stress, and enjoy after a long day without booze. The following ingredients produce its characteristic tranquility:

How to Make Nootropic Booze (DIY)

There are two components to creating your own nootropic alcohol replacement:

Choose one or more of the following buzz-producing ingredients, and add them to the base.

Kava is among the most popular alternatives to alcohol. It’s made from a plant native to the Pacific Islands and is in the pepper family. Kava is a social brew used in the South Pacific, traditionally served in a shell. It’s relaxing, anti-stress, and insomnia-relieving properties are thought to come from an ingredient called kava-lactones.

Kava has an “earthy” flavor best described as an acquired taste. Few sweeteners and mixers effectively mask the taste.

Island rituals have included kava for thousands of years. There’s a myth that kava can lead to liver injury. WHO research found that “Kava has had at least a 1500-year history of relatively safe use, with liver side effects never having arisen in the ethnopharmacological data… Clinical trials of kava have not revealed hepatotoxicity [liver injury] as a problem.” Follow-up studies confirm the safety of high-quality kava for recreational use.

When choosing a safe and effective product I look for:

The product I’ve found that fits the bill is TRU KAVA.

Use the exclusive code URBAN for 10% off

One of many cannabinoids in cannabis, CBD relaxes and de-stresses without the psychoactive effects characteristic of pot (THC). CBD comes in the form of flowers, tinctures, or food and drink infusions.

This cannabinoid, in particular, exerts adaptogen-like effects throughout the body. It puts my muscles and mind to ease without sedation. Over 100 studies support the neuroprotective effects of CBD.

Unlike booze, my Oura Ring shows that CBD actually improves my sleep scores. CBD works on the endocannabinoid system which is responsible for maintaining homeostasis. Consume too much, however, and you’ll wake up feeling a temporary haze. Combat the mild “CBD hangover” with a squeeze of lemon or a drop of a clean lemon essential oil.

Keto has become a household name. The diet boomed for its brain-boosting, appetite-reducing, and general health-improving effects. What makes it so powerful? Restricting carbohydrates causes a natural surge of an alternative fuel source called ketones. The brain is accustomed to glucose, and these molecules are like rocket fuel. You can produce them naturally, or take ketone boosting supplements. But one special type of ketone called 1,3-butanediol mimics the effects of alcohol.

Researchers are still investigating the long-term effects of 1,3-butanediol. Early users compare the buzz to a drink or two of alcohol. You can learn more from this short interview snippet. Or check out KetoneAid’s R1,3 product listed above.

I hesitated to put phGABA (also called phenibut) on this list. It’s a potent grey-area nootropic regulated in certain countries. Of course, it’s intended for research purposes only. PhGABA is an upgraded version of the relaxing brain chemical called GABA. Why not supplement normal GABA? The phenyl group in phGABA (hence the ph) helps it cross the blood-brain barrier. So phGABA feels similar to alcohol.

But that’s not all.

PhGABA only targets a specific type of GABA receptor. Causing the feel-good effects of alcohol without slurred speech or loss of coordination. But I was reluctant to list it. Why?

Phenibut builds tolerance extremely quickly. And abuse leads to nasty withdrawal symptoms. I’m able to stick to taking it just once every week or two. If I were prone to addictions, I wouldn’t even consider it.

Another related (but far less risky) GABA derivative is called picamilon. It too can pass the blood-brain barrier, and causes the familiar euphoric buzz of alcohol. Picamilon is everything I wanted out of phGABA without the same risk of addiction, tolerance, or adverse effects.

Use the exclusive Cosmic Nootropic coupon code URBAN for 10% off

I’ll admit that beets are a bit of a stretch.

If you like the energetic effects of drinking, eat (or drink) your beats. Beat juice is well known to promote blood flow. The exotic neon-pink glow makes for an interesting conversation starter.

Beetroot also reduces blood pressure. All of which makes it a great post-work beverage.

Don’t want the hassle of gathering ingredients and blending them yourself?

Choosing The Ideal Drink Base

Any worthy alcohol replacement needs a solid base. Water’s fine, but not very exciting. Some of the booze alternatives below are raw ingredients that go best in a satisfying liquid.

There aren’t many wrong choices. In my drinks I enjoy either:

Pour the flavorful base liquid into your glass, and add one or more nootropic ingredients. Enjoy a healthy buzz without feeling bad the next day.

Feel-Good, No-Hangover Mocktails (With a Kick)

I still drink. Lightly here and there. But here’s the thing:

I don’t really miss it.

The right replacements offer far more than booze. You can experience the fun parts of alcohol without the stupor or next-day pain.

In fact, part of the appeal is that these alternatives improve your cognition, sleep, and recovery. You’ll feel great, and wake up the next day primed to perform your best. Your Oura Ring scores will prove it.

Some of my favorite alcohol alternatives that produce a buzz or social energy boost include:

I’ll continue to test new ingredients and formulations as the research emerges.

Am I missing anything?

Let me know your favorite alternatives to alcohol in the comments.