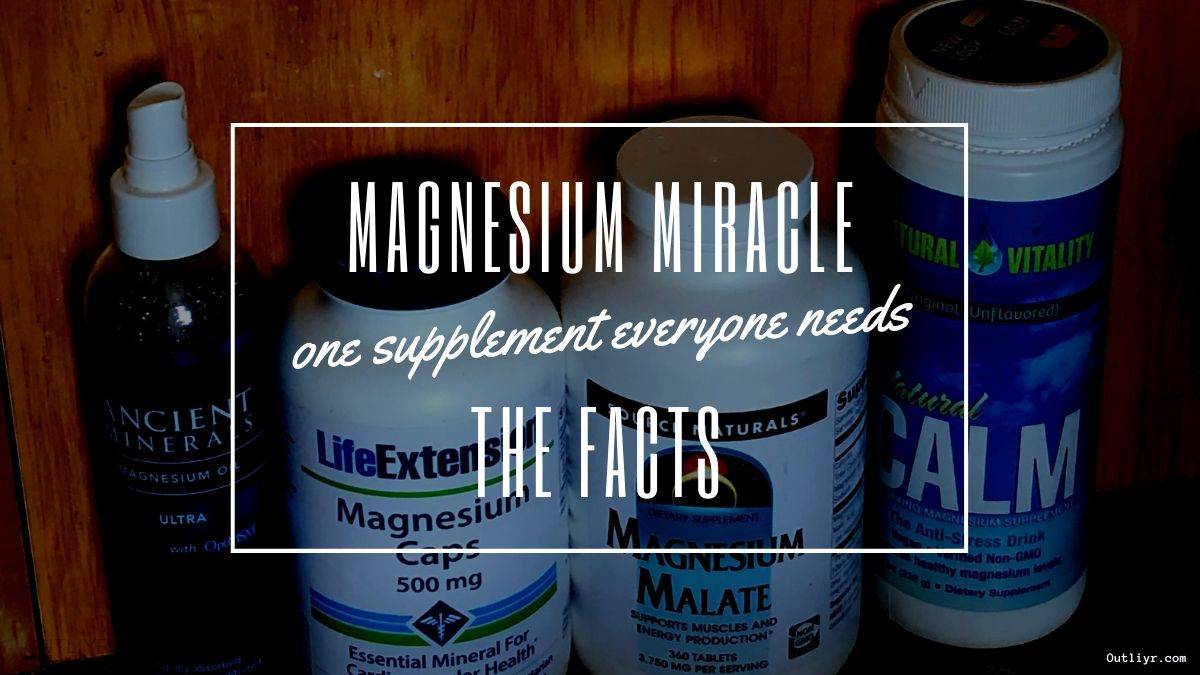 Table of Contents Show
What Magnesium Does Unlike Other Vitamins and Minerals
1. Smart Drug With No Side Effects
2. Can’t Be Happy Without It
3. An Athletic Super Supplement
4. Helps Most Chemical Reactions Take Place
5. Instrumental in Energy Generation
6. Get More From Your Meals
7. Relaxes Muscles Naturally
8. Reduces High Blood Pressure
9. Repairs Your Genes
10. Supports The Adrenals
11. Curbs Cravings
12. Natural EMF Radiation Blocker
13. Balances Neurotoxic Calcium
14. Healthier Babies
Nearly Everyone is Deficient
15. Magnesium-Depleted Soil
16. Bound in Anti-Nutrients
17. Up in Steam
18. Common Lifestyle Habits That Further Deplete Magnesium
19. Magnesium Improves These Conditions
20. Do You Have Symptoms of Magnesium Deficiency?
21. What You Can Do About Magnesium Deficiency
22. Establish Your Baseline
23. Magnesium-Rich Foods
24. Best Magnesium Supplement Forms
Magnesium: An Ancient Health Secret Rediscovered

I take very few supplements every single day of the year.

Before you roll your eyes and think *next*, consider this seemingly boring mineral.

For years I overlooked it in favor of the latest popular molecule. On a whim one day, I read an entire book dedicated to one sole mineral. Very unlike me. I never looked at food the same. And that mineral…?

My highlights from Carolyn Dean’s book The Magnesium Miracle completely filled 36 pages of Microsoft Word. Each line a nugget on its connection to human health.

I’ll condense my discoveries so that you understand why I’ve made magnesium an integral part of my morning routine for years, and why you want to do the same.

What Magnesium Does Unlike Other Vitamins and Minerals

Out of nowhere, I began hearing about this innocuous mineral mentioned everywhere. Decades ago, biohacking prophet Charles Poliquin crowned Magnesium “one the best anti-aging minerals”.

From what I’ve read, it looks pretty close to a brain and body panacea.

1. Smart Drug With No Side Effects

Neuroplasticity refers to the ability for the brain to absorb new material.

“As predicted by our theory, increasing the concentration of magnesium and reducing the background level of noise led to the largest increases of plasticity ever reported in scientific literature.”

Every day labs pump out new research chemicals claiming to be the next limitless pill (the brain unlocking compound from this movie). For learning, magnesium has a larger boosting effect on neuroplasticity than commonly used racetam family of smart drugs.

2. Can’t Be Happy Without It

You know the “feel good” brain chemical serotonin? It is the one that anti-depressents like Prozac work on.

Brain cells need an abundance of magnesium to produce and use serotonin. Without it, you’re blunting your potential happiness. The other reward neurotransmitter, dopamine, also relies heavily on magnesium to do its job.

Care about your body working properly?

325 different enzymes depend on magnesium to do their jobs. Disrupt any of those 325 processes and you’re asking for trouble. Many of those enzymes are part of the energy generation process.

Adenosine triphosphate (ATP) is the gasoline of your body.

Bad things happen when you run out. Magnesium aids in both production and transportation of ATP energy throughout the body.

6. Get More From Your Meals

Well if you care about digestion, magnesium actives enzymes that control digestion, absorption, and the utilization of your macronutrients.

Within minutes of applying topical magnesium oil I actually feel deep relaxation. Similar to the after-glow effect of a long, hot bath.

Perfect post-workout and great for recovery. Additionally, I no longer wake up with excruciating muscle cramps in the middle of the night.

A word of caution: It’s powerful and enhances the effects of prescription muscle relaxers.

Synthesizing and ensuring proper DNA, RNA, and protein structure can only happen with enough magnesium.

I tax my adrenals a fair amount. I’m on the dregs of my second coffee as I write, for example.

Whether physical or psychological, magnesium is one of the best adrenal-supporting minerals. Adequate levels improve relaxation and quality sleep.

In the last few years I’ve developed quite a taste for chocolate.

I learned that overeating and cravings usually come from the body desperately trying to get certain nutrients. In my case it was magnesium.

Several months into my magnesium journey and those cravings partially subsided.

I’ve now read two books on EMFs and they both mention something called voltage-gated-calcium-channels (VGCCs). A complicated word for what’s essentially a two-way calcium and magnesium bridge along the border of your cells.

A scientist named Martin Pall discovered that blocking the calcium channel with drugs minimized damage from EMFs. Magnesium works similarly by blocking the NMDA receptor. Without the heavy drugs.

You need calcium to live. But that’s not the problem for most of us.

Calcium and magnesium are opposites. Calcium excites, magnesium relaxes. The inside of our cells needs them in balance. 10,000 times more magnesium than calcium. We get plenty of dietary calcium, and as you’ll soon see, very little magnesium.

Calcium has a dark side:

Quite a simple prophylactic with little downside.

Enough said for me.

Nearly Everyone is Deficient

Maybe you’re thinking, “but I eat a balanced diet, and have my lifestyle under control. Surely I’m not deficient“. That’s what I wanted to believe at least.

Even a slight deficiency in magnesium can amplify the already negative effects of strenuous exercise and other symptoms. Click To Tweet

Sadly, we get far less magnesium from diet than ever before, and simultaneously we excrete more. The Catch-22 of it all is that magnesium deficiency further hinders absorption.

Out of her list of what I estimated to be 100+ deficiency risk factors, here’s my summary:

“If there is no magnesium in the soil, plants will have none; they cannot manufacture it out of thin air. So don’t believe it when someone says that you can get all your nutrients in a good, balanced diet.”

It all begins with the soil. The nutrition of your food depends on it. Believe it or not, in some cases, Walmart is Healthier than Whole Foods.

Industrial farming techniques have poisoned the soils for decades. Farmers cut corners to get food on the table as cheaply as possible. Pesticides, herbicides, and nitrogen fertilizers kill the rich soil ecosystem resulting in mineral-poor crops.

Weak, magnesium-depleted food fill your plate. You don’t have to accept nutrition free food. Shop directly from your local farms instead.

Oxalic acid in greens, phytic acid in seeds and grains, tannins in teas, and certain chemicals in waters all bind to magnesium and render it unabsorbable.

You could soak the grains for eight to twelve hours to breakdown the phytic acid.

I’m not a fan of grains, so I choose a different food altogether.

Finally, the food arrives and you get your fix of precious magnesium.

All said and done, nutrition label magnesium amounts won’t match what ends up in your body.

Say you soak your grains for twelve hours, and pay careful attention to your magnesium intake. You perfectly balance the delicate ratio between the two. That in itself deserves an award.

Do you make any of these other common lifestyle mistakes?

If so, you’ll excrete more magnesium and thus require even more:

I’m guilty of more than a few of those.

Starting to wonder about your magnesium yet?

Some symptoms and conditions completely dissipated while others lightened. Some of the ones that stood out to me in no particular order:

We’re not through quite yet.

You may just find the underlying cause of a symptom.

20. Do You Have Symptoms of Magnesium Deficiency?

Magnesium deficiency presents itself in many disguises.

Just because you have one of more of the following clinical and sub-clinical symptoms does not guarantee it’s from magnesium. But it warrants further investigation with your doctor:

Hard to believe that one mineral can impact so many different diseases, conditions, and symptoms.

You can lack classical symptoms and still have sub-clinical deficiency. Meaning that you stand to benefit from adding magnesium foods or supplements.

21. What You Can Do About Magnesium Deficiency

“Because magnesium has not been shown to produce any toxic effects when ingested as a naturally occurring substance in foods, a [upper limit] cannot be established for dietary magnesium at this time.”

Supplemental magnesium has a long and proven safety record.

Given the very low downside, and the huge upside, it seems like a no-brainer for most of the population.

Of course, always check with your doctor before starting any new supplement. You can also get laboratory testing if you want precise data.

Magnesium is one of the more difficult lab tests because the amount in the blood does not correlate with the amount of magnesium in other parts of your body. Stress also artificially increases the test result by pumping magnesium from inside your cells into your blood — giving the appearance of normal magnesium levels. In addition, 99 percent of the body’s magnesium is not (and should not be) in the blood.

If you decide to go down the testing route anyway, Carolyn recommends “ionic magnesium” testing. Other options include the “RBC magnesium” test, and an “EXATest”.

Bone meal was a good choice until 1945 when scientists began finding alarming levels of radioactive isotopes (strontium 90) in them.

You have lots of supplement options. I’ll order them by my preference:

Magnesium oil is in a league of its own. My longtime favorite absorbs comparable to IV magnesium. You can spray it on certain areas that need more attention for a localized effect. Two or three minutes after application I can already feel it working. I use a few sprays of this almost every night.

The general recommendation is to take 400-900 milligrams of magnesium depending on your lifestyle factors. Look for the amount of elemental magnesium on the label and choose one of the above forms.

Magnesium has a diurnal rhythm. Meaning that it’s most important in the morning and evening.

I prefer to take it first thing in the morning or late in the evening, and sometimes both. Take it away from meals since it naturally neutralizes stomach acid.

Virtually everyone can use more Mg.

A few months after I started supplementing it, I noticed that seemingly unrelated symptoms lightened up. Some even went away.

I now get as much as possible from my diet, and supplement the most bioavailable forms. Surprisingly, even my flexibility has improved.

If you have a pulse, you should give magnesium a try.

This post contains affiliate links, which means I may receive a small commission if you make a purchase to support my work at no cost to you. Thanks for your support!

Any cookies that may not be particularly necessary for the website to function and is used specifically to collect user personal data via analytics, ads, other embedded contents are termed as non-necessary cookies. It is mandatory to procure user consent prior to running these cookies on your website.