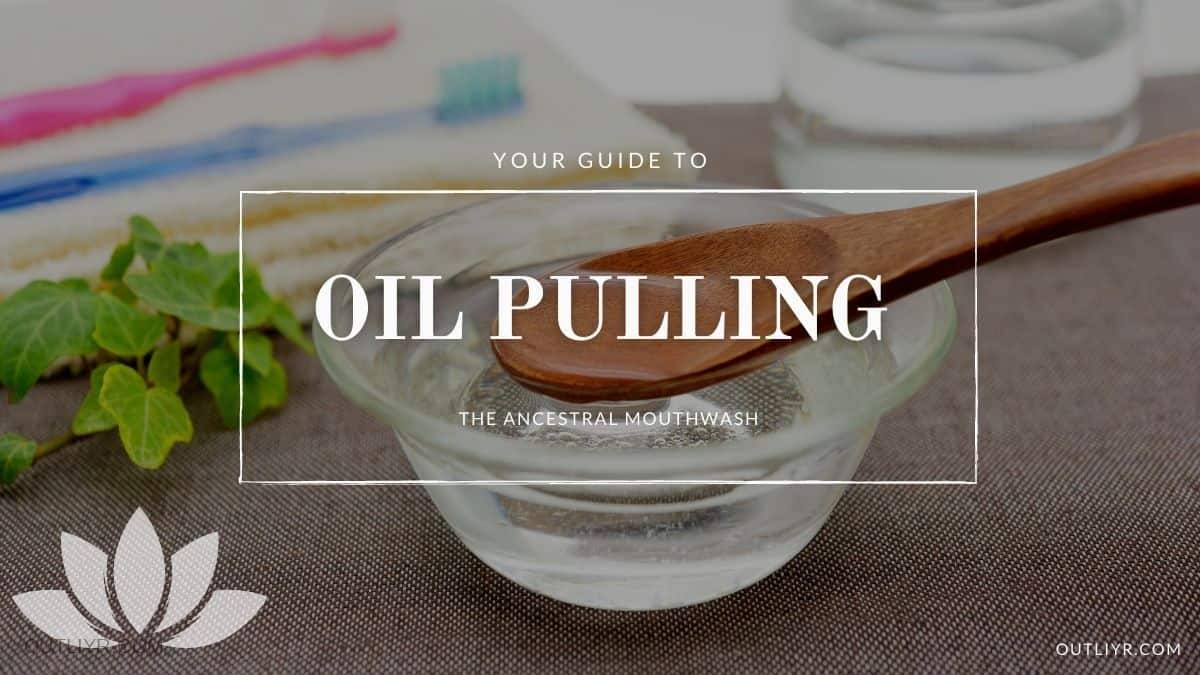 Table of Contents Show
Introducing the Ancient Practice of Oil Pulling
The Benefits of Oil Pulling
How to Oil Pull
Choosing the Right Oil
Oil Pulling Step by Step Process
Frequently Asked Oil Pulling Questions
Should I tooth brush with coconut oil?
Do you brush your teeth before or after oil pulling?
Can oil pulling prevent and reverse cavities and tooth decay?
Oil Pulling: The Oldest and Most Powerful Mouthwash

My buddy has a weird habit. First thing after waking he’d grab coconut oil. But not for cooking. Instead, it went from the jar straight into his mouth. I couldn’t believe my eyes.

One day I asked about it. Citing various health benefits, I laughed off the routine as a crazy, unscientific quirk.

Coconut oil is an effective antimicrobial, natural sunscreen, moisturizer, antioxidant, and the MCTs even boost the brain. Click To Tweet

However, Ayurveda laid out rationale behind this radical practice. Unlike chemical-filled mouthwashes, natural oils selectively kill bad bacteria, whitens teeth, and heal the mouth. I now do it daily, and in my time have enjoyed some unexpected benefits from oil pulling.

Oil pulling is the oral hygiene practice of swishing specific oils around the mouth to clean, disinfect, and heal. Oils clean and soothe the mouth rather than drying it out like most alcohol-based mouth wash products. Although now regaining popularity, Ayurvedic advocating oil pulling for oral care at least 5,000 years ago.

I’m not recommending it as a replacement for traditional healthy mouth practices like tooth brushing, flossing, and tongue scraping. Rather, oil pulling is a safe and effective adjunct to incorporate.

In fact, Ayurveda was first the first system to practice tooth brushing using twigs of a plant called neem. Neem is nature’s prebiotic and postbiotic. Together with oil pulling, the two practices reduce bad bacteria, while supporting the ideal oral microbiome.

Oil pulling is cheap, simple, and effective. Swishing oil around your mouth instead of an alcohol-based solution takes time some acclimation. Once you do, however, you won’t go back. Today I’ll cover everything beginning oil pullers should know to get started, including which types of oils to choose, how often and long to practice, and potential side effects.

The Benefits of Oil Pulling

Oil pulling is best known for cleansing the mouth. But that’s just the beginning. The entire body is tightly linked. A healthy mouth leads to a healthy body (and mind). In accordance with ancient wisdom, science is quickly realizing that oral health is a window into overall health.

Replacing conventional mouthwash with high-quality oils heals, strengthens, and rebuilds both the mouth and body as a whole. Click To Tweet

Benefits of frequent oil swishing include:

Clean oils have the same benefits as store-bought mouthwashes, without any of the questionable ingredients or collateral damage to healthy bacteria.

Now you know some of the reasons why I oil pull daily. Here’s how.

How to Oil Pull

That’s why Ayurveda uses fats as a chelating agent. They attach to and extract fat-soluble toxicants from tissues. Quality matters. Fat can damage or heal. Purchase clean oils, and swish for the recommended time.

Only a few oil types have a place in oil pulling. The main oils are:

Ayurveda recommends each of the above depending on the circumstance. Today, however, most people use coconut oil.

I do too, since coconut oil also contains the antioxidant Vitamin E, and the antimicrobial compounds lauric acid and monolaurin.

Since fats easily absorb toxins, I’m picky about my oils. When buying check product labels for:

I like this coconut oil brand for the combination of quality and value:

Formulations created specifically for oil pulling are often infused with healthy herbs and essential oils. In addition to smelling great, herbalized oil enriches the experience. They kill even more of the bad bacteria by inhibiting quorum sensing (how the bacteria communicate). Common essential oil infusions include:

Once you have the materials let’s get started.

Eventually I overcame my objections and decided to try it. I grabbed my jar of coconut oil. Then what? I wondered:

I found answers. Most recommendations are to oil pull five to seven days per week.

Oil pulling doesn’t require extreme dedication or focus. You can multitask while waiting your 5-20 minutes. I’ll begin while showering or making my morning super coffee.

You might notice that the oil’s volume in your mouth doubles after a few minutes. I feel it around six minutes. Perhaps it’s the oil mixed with saliva. Others believe it’s oral debris absorbed into the oil.

With practice you’ll streamline the whole process. So that the new habit sticks, make sure to start with short 2-3 minute sessions. Then slowly work up to the full recommendation.

Should I tooth brush with coconut oil?

While tooth brushing with coconut oil may have some health benefits, but it isn’t equivalent to oil pulling. That’s because swishing coconut oil around the mouth pre-digests it. Swishing also “activates” coconut oil through different enzymes.

Do you brush your teeth before or after oil pulling?

You can brush your teeth before or after oil pulling. It’s a personal preference. The Ayurvedic recommendation, however, is to oil pull after all other oral care routines (brushing teeth, tongue scraping, flossing). Preferably before any drinks or food.

Can oil pulling prevent and reverse cavities and tooth decay?

Oil pulling is most effective as a preventative practice. It kills the bacteria responsible for eroding teeth and causing cavities. While It can prevent cavities and tooth decay, oil pulling will not reverse damage.

Oil Pulling: The Oldest and Most Powerful Mouthwash

I struggled my first few sessions. The thought and texture of swishing coconut oil repulsed me.

But before long, oil pulling became integral to my morning routine. As I mentioned in my post on the top natural teeth whitening products, a few weeks later others began commenting on my noticeably whiter teeth.

I added tongue scraping to my oral care routine too, so I can’t completely isolate improved mouth health to oil pulling. I do notice small changes like better breath, fewer tooth stains, better digestion, and stronger gums. My dentist accustomed to seeing cavities told me to “keep up whatever you’re doing”. So I am.

I went from avid mouthwasher to oil puller. If you’re looking for a little extra flavor and freshness add a drop of peppermint essential oil.

Recently, I called my friend back. Our roles reversed. He got the last laugh when I thanked him for his “weird” habit.

When you try oil pulling, let me know how it goes. In addition to essential oils, have you found any upgrades to the basic practice?