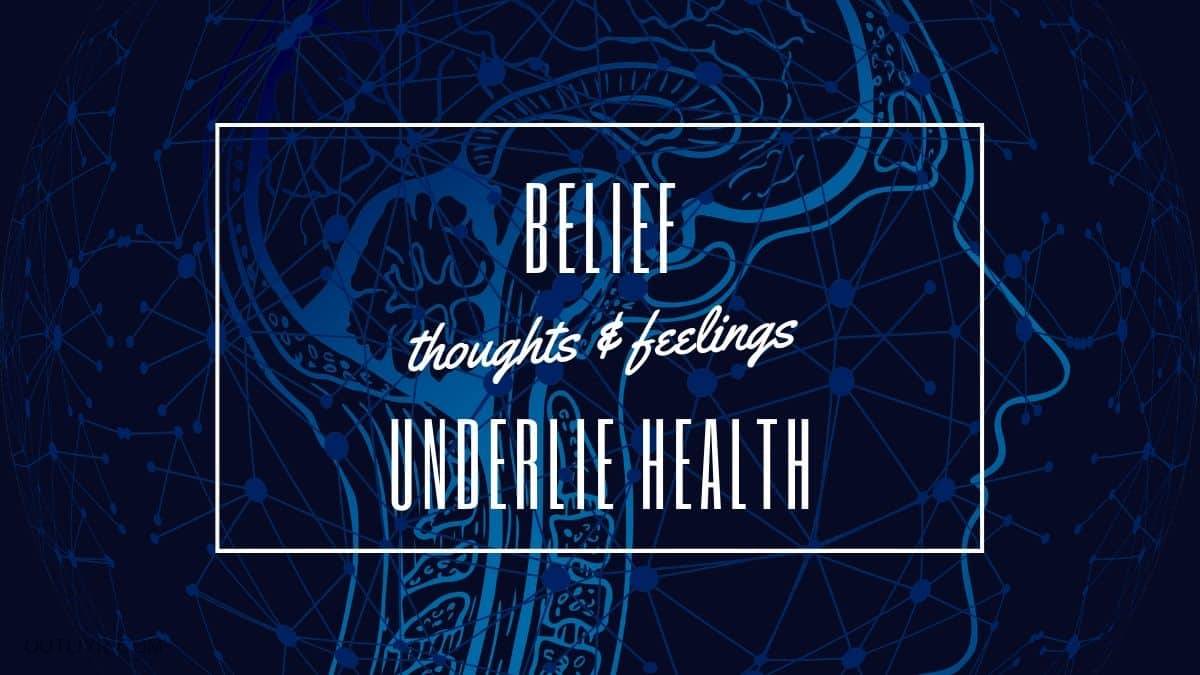 Table of Contents Show
Your Beliefs Matter
Beliefs Steer Your Life
Favorite Technique of High-Achievers
Weight Loss Programs Fail
Results Comparable to The Most Prescribed Drugs on Earth
Expert Freedivers Build Monstrous Lungs
World’s Elite Memorizers Share Their Secret
Thoughts Become Things
Turning Mindset into Your Advantage
1. Recognize
2. Interrogate
3. Devise
Belief: Unmatched Power & Resiliency
"You go where you look. Stare at a rock in the road, and you're sure to hit it." Click To Tweet

My dad reminded us on every bike ride throughout my childhood. Sure enough, I did exactly that. Look where you want to go. Over the course of a ride, it’s easy to forget and accidentally steer into obstacles.

Not just rocks and ruts either.

In each situation, one commonality holds you back.

Every belief has potential to heal, strengthen, and steer your subconscious:

You choose. Modern science confirms that you’re not permanently hardwired into thinking a certain way.

Until you believe you’re resilient and capable of overcoming any obstacle, you’re artificially capping your potential. You’ll fight an uphill battle every day.

Changing deeply ingrained beliefs doesn’t happen overnight. Nor is it a cakewalk. Today I am going to explain the powerful force of belief, and how you can rewire negative thoughts, feelings, and beliefs into your advantage.

Your body doesn’t differentiate from reality and thought.

Each time you recall a past event, success, or failure, you reproduce the same internal chemical state. Reliving stressful situations taxes the body and its recovery systems.

That’s how just thinking about an argument can make you tense and on-edge.

Recalling an event strengthens its neural circuit, making it easier to revisit in the future. Once you get caught in a negative loop, your health declines rapidly, and chronic disease may manifest.

On the other side, indulge in positive memory, and your body recreates the same elated state. The same thing happens, but instead of wearing the body down, it builds it up.

I only recently began to see the glass as (more than) half-full.

I didn’t change through magic. And sometimes I default back to the half-empty glass.

A lifetime of repeated thought patterns and beliefs strengthens your perspective.

What’s you mindset even capable of?

What do government agencies, military special forces, professional sports teams, and hard-charging execs have in common?

For one, they harness the full potential of the mind. These groups bring in mindset coaches that focus on reprogramming limiting beliefs.

The coaches walk them through a series of easy exercises (we’ll get to one practice later). They recognize limiting, weaken, and overwrite limiting beliefs.

Visualization. Before major games, competitions, or events, these groups mentally rehearse—and feel—their desired outcome. They liven the imagery, making it so real that their biology can’t tell the difference from reality.

And if Olympians swear by it, you can bet it’ll work for your big presentations, or to drop serious weight.

It’s nothing new. Yet it just doesn’t help.

It relies on willpower.

And that willpower is finite. That’s right. You wear down willpower throughout the day. Only sleep recharges it.

Personal trainers sometimes get injured and gain weight. Lots of weight. Yet they manage to shed it. If they relied purely on willpower, they’d crumble to any temptation. They believe—they know—at a deep level that they can lose it. And they do. Without any special fat burning pills.

Results Comparable to The Most Prescribed Drugs on Earth

Belief produces such strong and reliable effects that every semi-credible study benchmarks against it. Click To Tweet

A baseline control group believes they are receiving the actual treatment. What happens? They often heal remarkably even though their “treatment” pills are nothing but sugar.

You hear miracles of people beating disease all the time. Spontaneous remissions with no modern scientific mechanistic explanation. Patients that defy the laws of Newtonian physics.

Our ancestors understood something we don’t.

Ancient medical systems like Ayurveda and Traditional Chinese Medicine view the mind as capable of producing or healing disease. Or in daily life to rapidly build new skills.

The world record holder, Herbert Niche, has double the lung capacity of the average human.

“Neither Nitsch nor any of the other freedivers started out like this; they made their lungs larger by force of will. They taught themselves how to breathe in ways that dramatically changed the internal organs of their bodies.”

Nitsch aside, other pulmonary superstars also worked to get where they were.

“The freedivers told me they’d previously been “most people.” Their transformation was a matter of training; they’d coaxed their lungs to work harder, to tap the pulmonary capabilities that the rest of us ignore. They insisted they weren’t special. Anyone in reasonable health willing to put in the hours could dive to 100, 200, even 300 feet.”

Their journey towards developing the most powerful lungs on the planet didn’t start with training. It started before that.

If they doubted themselves at each step along the way, the inevitable discomfort of developing new skills would make quitting that much more alluring. Doubt began evaporating as they saw progress, uprooting their limiting thoughts and feelings.

I have a bad memory.

We’ve all heard that muttered countless times. Maybe you believe it about yourself.

Virtually every participant described themselves as having poor or average memory. Only after changing their mindset, and learning the art and science of memorization did they flourish.

Today, contestants winning memorization contests mostly explain that they started with worse memory than the general population. Click To Tweet

These memorizers singlehandedly went from below average to leading the human species using belief and hard-work.

Belief doesn’t contradict Neuroscience or epigenetics. These fields show us that the subjective mind influences the objective world.

That’s how a thought turns into an action. Or in other words, a thought becomes a thing.

A few examples I came up with from daily life:

Turning Mindset into Your Advantage

I use a three-step process to convert my self-limiting beliefs. I call it R-I-D. RID starts with recognition and ends in new empowering beliefs.

Like all great tools, the more you practice transforming your beliefs, the easier the whole process becomes. Before long you’ll be left with nothing but the good.

You cannot bring old, limiting thoughts, feelings, and beliefs into your ideal life.

What do you say to yourself?

Not out-loud, but internally.

Odds are, you tell yourself things you wouldn’t dare say to others. Things like:

Pay attention to the things you tell yourself. You’ll find that you repeat some things more than others. You think these beliefs so often that you probably don’t even notice them anymore. The more it is repeated (whether vocalized or not), the stronger it becomes.

“The inner critic isn’t harmless. It inhibits you, limits you, and stops you from pursuing the life you truly want to live. It robs you of peace of mind and emotional well-being and, if left unchecked long enough, it can even lead to serious mental health problems like depression or anxiety.” — Jennice Vilhauer

A good way of identifying them is to set a reminder for a few times per day. Notice things that you say or tell yourself that begin with:

“I am”, and “I am not” are especially pernicious. If you identify as something negative, how can you ever expect to break free from it?

Worst of all, most of these statements simply aren’t true.

Trace back that negative thought pattern to the limiting statement.

Many of these are just wrong. They’re a glass ceiling that you, or others created with no factual basis. And these ideas limit your potential.

Negative beliefs play on strong emotional charges. Get below them. Question their validity.

I used this process myself.

Through most of college, I told myself that I’m bad at learning. I thought it all the time, reinforcing the beliefs. One day I questioned the belief. Where did the idea come from? I traced it back to my disdain for reading as a young kid. The kicker? Once I started choosing my own books, I began to love reading. And with practice, I got good.

By telling myself that I sucked at learning, I did it less often and disliked it. Without practice, it became a self-fulfilling prophecy. I got worse.

Until I questioned the belief, and then took action.

It’s time to update the operating system of our brain with new positive beliefs.

Without a game-plan for creating powerful new beliefs, this is just a thought experiment.

I celebrated the micro-wins along the way.

Eventually it started to feel real, and I changed my self-talk again. I moved on to “learning comes easily to me, and I improve every day”.

Then I made my affirmation more powerful through the use of visualization. Visualizations create vivid and lasting imprints in the human brain. I imagined how successful learners go about tackling a new book, course, or subject. I saw myself replicating their behavior. I left the sensations and emotions of a super-learner. I briefly lived the scene.

The old internal voice still comes up. I recognize it, question it, and replace it. Conjuring up the visualization evolved me past the limiting belief.

I view my inner critic as a separate entity, one that I’m distancing myself from. It’s made negative thoughts easier to ignore.

It’s easy to brush off something as simple as belief.

But that’s a HUGE mistake.

Nothing in the modern world remotely approaches the healing abilities of even the most ill humans.

Your brain and body don’t know the difference between belief and reality. It’s not an overnight process, but you can reprogram your subconscious beliefs however you want. Once you do, you can transcend your current state.

My challenge to you is to follow the RID three step process today:

3 thoughts on “Hacking Belief: The Most Powerful Healer You’re Ignoring”