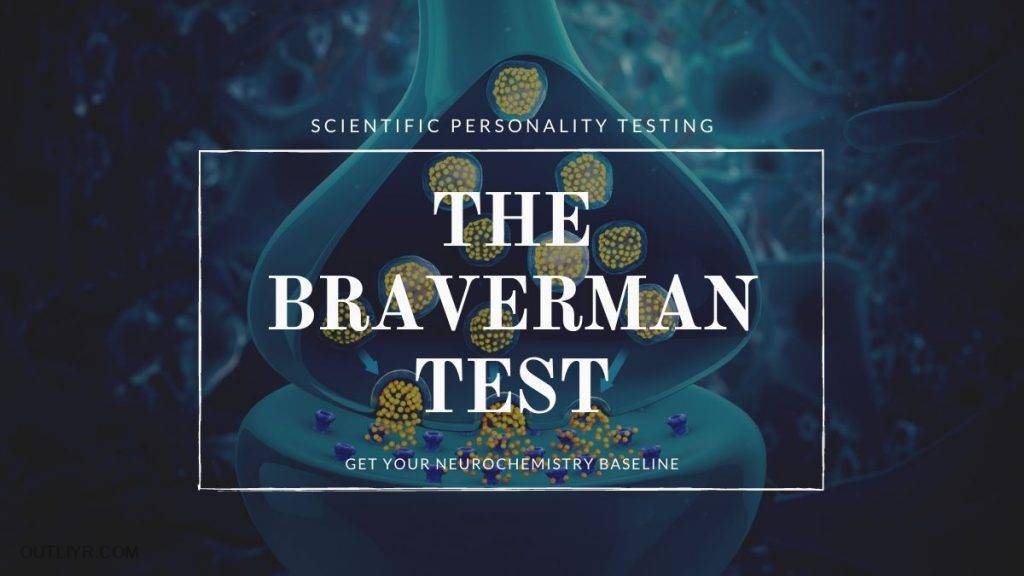 Your brain is one of a kind.

I’ve tried personality tests. A lot of them. They spit out results seemingly applicable to any human with a heartbeat. Generic cookie-cutter recommendations are on their way out.

You answer a detailed behavioral questionnaire that returns a fairly accurate snapshot of your brain’s chemical makeup (called neurotransmitters). From there you can optimize your diet, lifestyle, and supplementation. The Braverman test isn’t perfect, but it presents you with a good starting point.

Everyone has their own unique balance of neurotransmitters, and levels of each fluctuate throughout the day.

The Braverman Test is a personality test designed by a leading neurotransmitter scientist named Eric Braverman. This test classifies your brain chemistry through a series of behavioral questions. Unlike most other personality assessments, the Braverman test generates recommendations based upon an approximation of your brain chemistry. And it is more accurate and personalized than others.

Your results not only show your strengths, but deficiencies too. Correcting deficiencies can profoundly alter your brain chemistry for the better. Some people notice symptoms disappear and that their quality of life improves.

I discovered the Braverman Test through one of my favorite biohackers, Charles Poliquin. On the Tim Ferriss Show, in 2016, he explained how he uses the Braverman questionnaire to tailor his athletes’ training. Naturally, I gave it a go. I liked what I found.

The Braverman test is split into two sections:

In each section, you answer questions related to the specific neurotransmitters: dopamine, serotonin, GABA, and acetylcholine.

You might already have a sense of your dominant personality qualities. Or maybe not.

I like confirming the results. There’s a narrow window of optimal neurotransmitter levels.

You can use this to tailor your supplementation regimen. For people high in dopamine, that nootropic that boosts it further can lead to excessive risk-taking behaviors and impulsive actions. Braverman explains the downsides of excess.

Braverman neurotransmitter deficiencies are the equivalent of personality “weaknesses”.

The tool calculates your results and interprets your neurotransmitter deficiencies. Deficiencies fall into four separate categories:

Eric also gives specific supplement and dosage recommendations tailored to your results. Do your own research though. I’ve heard very mixed results on the recommended dosages. Generally, begin with in the low-range, and slowly work up.

Disclaimer: always consult your doctor before starting a new supplement.

One of the more interesting applications of the assessment is its application to athletics.

You might wonder about the link between neurotransmitters and sports.

I know I did. Charles cleared it up on the Tim Ferriss show. Why listen to Charles?

In the sports world, he’s a big deal:

Charles introduced a new paradigm in his 2005 article called “The Five Elements“. As the name suggests, he integrated the principles of Traditional Chinese Medicine into the training programming of his athletes.

Accordingly, athletes have a particular “elemental type” corresponding to their personality. His greatest athletes accounted for neurotransmitter dominance in their training:

Star athlete or not, the test does have a few drawbacks.

Downsides of the Test

We now know that there are more than four neurotransmitters. The Braverman assessment only accounts for the large four. These less researched ones can affect you and your personality.

Self-reported data is notoriously inaccurate. Such is the case with questionnaires.

While better than most others, take Braverman results with a grain of salt.

I barely batted an eye from my results. I intuitively knew most of these already.

I’m happiest when I’m learning. I’m borderline obsessed with things that challenge my beliefs. I get lots of the acetylcholine precursor from eating copious amounts of eggs. Perhaps that’s why I’ve never done well with acetylcholine boosters. They give me anxiety and paranoia — side effects of too much acetylcholine.

Again, no surprise. I’ve always had a hard time truly relaxing. I’m more “Type A” than I care to admit, even though it’s idolized by society. Recently I’ve focused heavily on improving emotional wellbeing, a side effect of low GABA. I do really well on supplemental GABA, melatonin, valerian root, passionflower, and sometimes, Phenibut. I’m very cautious about my alcohol consumption since it is a powerful relaxer acting on GABA and therefore I have an especially high potential for addiction.

Personality tester or not, spend five to ten minutes taking this one.

You’ll get results you can use to effectively tailor your diet, supplementation, learning and lifestyle.

The results and recommendations aren’t too extensive, and it won’t replace all other tests. Given that it’s free, fast, and useful, Braverman personality typing deserves a spot in any biohacker’s toolkit.

What personality tests have you found useful?