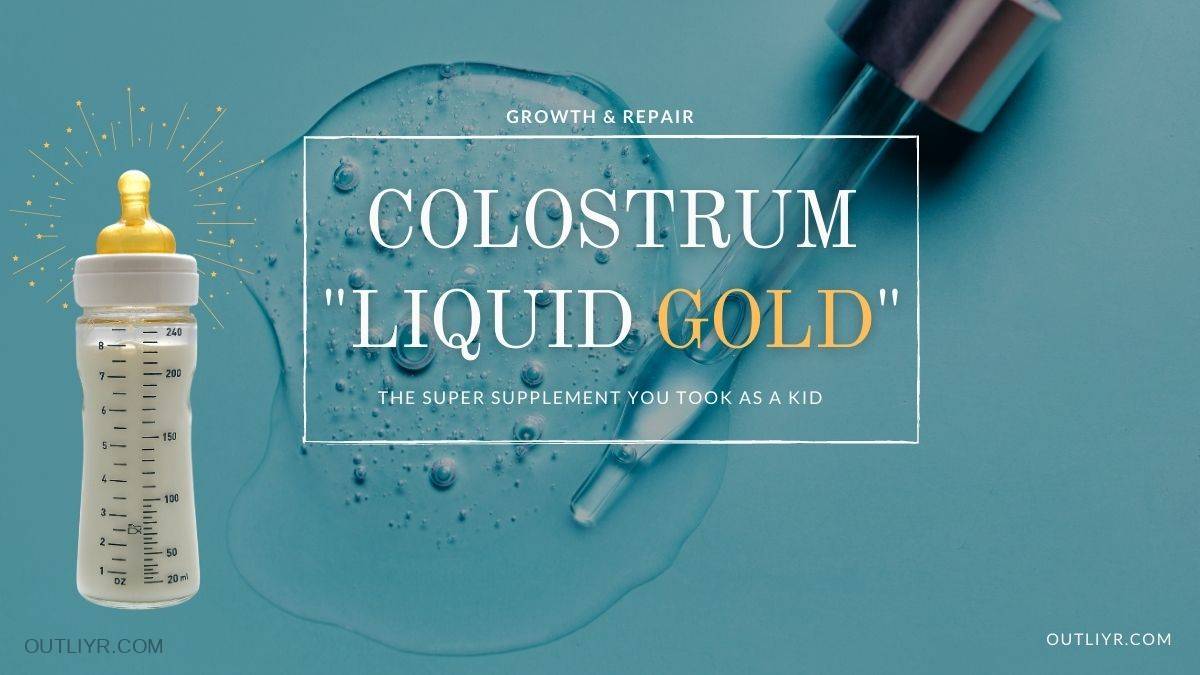 Have you heard of “liquid gold“?

Coming from a grown man, this will sound strange. In fact, it made a friend of mine the laughing stock of our circle.

But he was onto something.

Colostrum is a legal and effective natural precursor to HGH, IGF-1. It's the perfect all-in-one recovery booster. Click To Tweet

As it turns out, a special form of breast milk is a powerful athletic performance enhancer. And a tool to heal the gut, promote growth and repair, and provide natural immunity against all kinds of pathogens. This post will be your guide to supplementing goat and bovine colostrum, a well-studied form of upgraded milk.

Colostrum is a highly nutritious fluid excreted just before milk meant to protect and nourish babies. Colostrum is packed with all the substrates needed to fuel their rapid growth. You’re no baby.

But don’t fear. Adults have consumed colostrum for millennia.

India’s Ayurvedic physicians prescribed colostrum for medicinal and spiritual healing ever since the domestication of cows. Ancient Chinese medicine recognized it as a health staple. Various tribes use it as a natural remedy.

As of 2020, 9,300+ scientific articles have investigated the safety, efficacy, and benefits of colostrum.

How does colostrum compare to milk?

Some practitioners even add colostrum to enemas for greater absorption and immune stimulation. You’ll benefit from taking it normally too.

Visual learners will appreciate this breakdown of colostrum:

All mammals initially rely on colostrum for nutrition, immunity, and growth. If you can get over the oddity of consuming pre-breastmilk, this supplement packs a punch.

Here’s what researchers said about colostrum (emphasis mine):

While primarily used to heal the gut and enhance immunity, colostrum has other uses too.

The gut is a fragile structure. At certain places the lining is just one cell thick. Most of the focus on colostrum has centered around its overwhelmingly positive effects on the gut.

Colostrum burns fat, builds muscle, and improves athletic performance. But it shines in another arena.

Recovery is the overlooked pillar of sports performance. Multi-million dollar careers hinge on it.

Anything that improves recovery deserves consideration by serious athletes. But colostrum does even more:

The above quote makes a compelling case for its place in every athlete’s regimen.

Colostrum is like a meal replacement shake for babies.

In addition to the above, it even acts as an antioxidant.

Colostrum contains appreciable quantities of every immunoglobulin in it.

It’s broad infection-fighting powers have earned it the nickname “nature’s flu shot” (in addition to “liquid gold”). Colostrum is an anti-infective, including for diarrhea prevention and treatment.

It’s been studied to potentially prevent disease, to improve recovery, and stack nicely with other foods:

How to Choose The Best Bovine Colostrum Supplement

After you decide to take it, you’ll quickly face decisions.

Navigating the colostrum market is more difficult than I expected. To start, there aren’t many brands. There’s also the debate of pills versus powder versus liquid.

Look for grass-fed products. At the very least, if you can’t buy organic, I’d skip colostrum. Ethics aside, the last thing you want is to consume concentrated hormones, pesticides, chemicals, and antibiotics from animals raised in miserable conditions.

Check the colostrum for purity by looking up third-party testing results:

But if you’re looking for the purest colostrum capsules, Ancestral Supplements makes a great product:

To maximally absorb colostrum you’ll need to take it on an empty stomach, at least 30 minutes before food. Especially important with powders. Let it dissolve in your mouth for several minutes. With capsules, do the same and let them sit on your tongue. Salivary enzymes “activate” the colostrum.

Most people benefit from taking colostrum in the morning and evening. Athletes, however, should take colostrum an hour before exercise and before bedtime for the greatest protective effects.

Remember the old milk commercials? It turns out they were partially right.

While it’s only recently regaining popularity, India’s Ayurvedic physicians have prescribed colostrum for thousands of years. Today, nearly 10,000 studies have investigated the broad benefits of bovine, human, and goat colostrum.

Of the many uses, it’s most known for:

But don’t just rush out to your local Walmart. Cheap, conventional colostrum is loaded with toxins. You’re better off skipping it altogether than buy low-quality stuff.

Good luck explaining colostrum to curious friends. You’ll get a laugh or two. But eight weeks of supplementation later, they’ll be back for your advice.

Sit back, bask, and enjoy the I told you so moment.

Nick is not a doctor. This site provides research, observation, and opinion. Any information or products discussed are not intended to diagnose, cure, treat or prevent any disease or illness. Nothing on it is to be construed as medical advice or as substitute for medical advice.