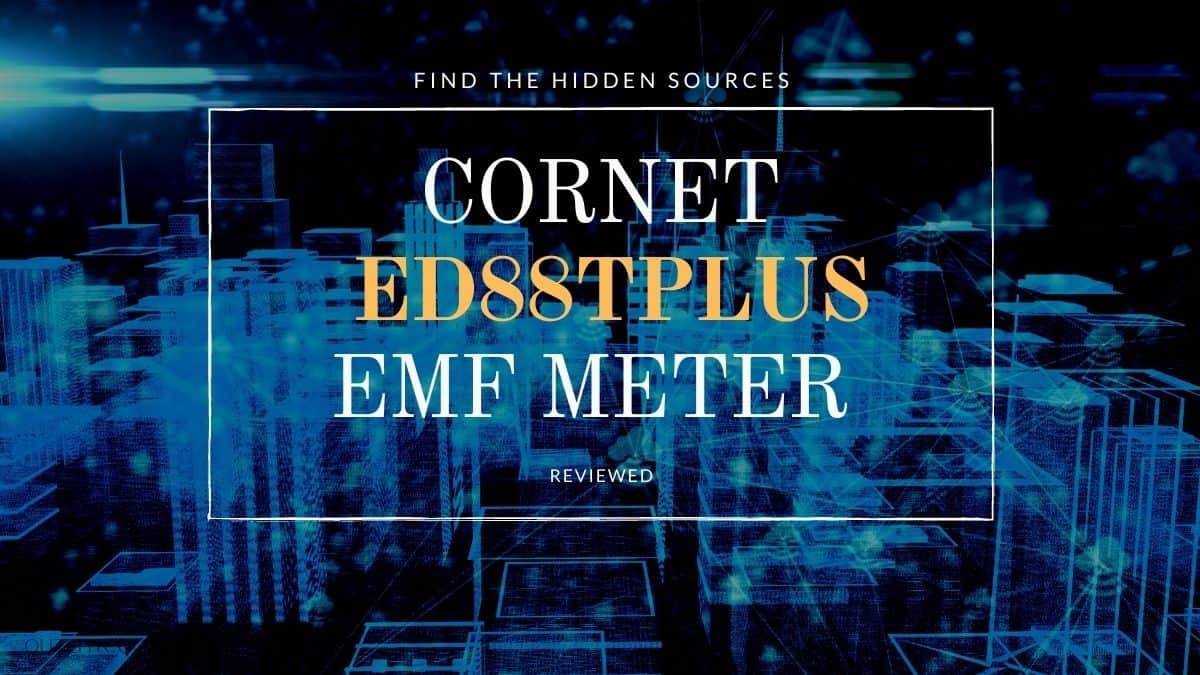 “Unless you take serious action to lower your EMF exposure, you will not be able to achieve full health, no matter how carefully you eat or how strategic you are in your lifestyle choices.”

I first heard about EMFs a decade ago and brushed them off as ridiculous conspiracy theory. In 2018 I read Nicolas Pineault’s hit book The Non-Tinfoil Guide to EMFs. I cross-referenced the studies and awoke to the potential invisible threat to human health.

No matter your stance on electromagnetic radiation, the precautionary principle warns that you're better safe than sorry. Click To Tweet

The link between serious degenerative diseases and electrosmog grows by the day. Getting to healthy levels requires quantification of our exposure through technology.

After my research, there was no turning back. I feverishly research EMF mitigation products. After rigorous testing, the ED88TPlus stood out as the best professional EMF meter under $200. In this Cornet ED88TPlus review, I’ll explain why it’s still a favorite among professionals and building biologists alike.

In a hurry? Pick it up on Amazon now:

Out of the four well-documented forms of electromagnetic radiation, the Cornet ED88TPlus measures all but dirty electricity.

The three forms mainly differ on their frequency, or the shape of the waves. Each has different characteristics and biological effects. One type, called dirty electricity is hardest to remediate. If Cornet had to miss one, luckily it’s dirty electricity. Only deeply qualified professionals should remediate dirty electricity problems.

Just above the frequency of audio, and below infrared is a spectrum called radio frequency. Technically, the frequencies range from 20 kHz to around 300 GHz.

As the name suggests, radio signals utilize this frequency heavily.

It picks up everything up to 8GHz. The Cornet ED88TPlus measures radio frequency sources including:

Magnetic fields are created by flowing electrical current. The higher the current, the stronger the magnetic field. Power is measured in microtesla (µT) or millitesla (mT).

Rule of thumb: the more energy something uses, the greater the magnetic fields produced.

The Cornet has two magnetic field (gauss) modes. One for high sensitivity, and one for low sensitivity. It picks up signals between 0.1uT and 60uT.

Electric fields have a frequency between 0 and 300 Hz. Unlike magnetic fields, electric fields exist whenever charge is present — regardless whether current is flowing.

Rule of thumb: anything plugged into a power source generates an electric field in the air surrounding the cord.

Note: these fields also drop off very quickly. Often putting just a foot between you and cords is enough.

I’ll admit that the product doesn’t look sleek and attractive.

I didn’t go around showing off my latest new gadget. Unless mid-century modern electronics go back in style, I doubt I will.

For a professional-grade meter, the Cornet ED88TPlus is portable:

Where this EMF detector shines, however, is its functionality.

My Experience With The Cornet ED88TPlus

How to Use the Cornet ED88TPlus Electrosmog Meter

Does the ED88TPlus Measure 5G?

5G is a new generation of connectivity gradually rolling out around the world. Researchers question 5G’s safety, and Dr. Mercola calls 5G “the single biggest public health experiment ever”.

The infrastructure is still catching up with the new technology. 5G telecom providers operate on one of two frequency ranges:

Today, virtually all mobile networks operate on frequencies below 8GHz, within the detection range of the Cornet ED88TPlus.

True 5G networks (not yet viable for nationwide rollout) will exceed 20GHz and not be detectable by this meter.

Currently, the Cornet ED88TPlus can measure most 5G signals. Once telecom providers increase the frequency above 8GHz sometime in the future, it will not.

The Cornet ED88TPlus is still the best value EMF meter on the market. This three-in-one meter has the features of professional devices at a more reasonable price.

You can find lots of knockoffs floating around the internet.

Saving a few bucks feels good, but may send you on a wild goose chase. I’ve heard stories of people tearing up their house, eliminating the worst EMF polluters. Only to later realize that it was a bad meter all along and the sources were fine.

If you decide to invest in a meter, I recommend getting the real thing through one of two places: Amazon or another credible online store (like Radmeters).