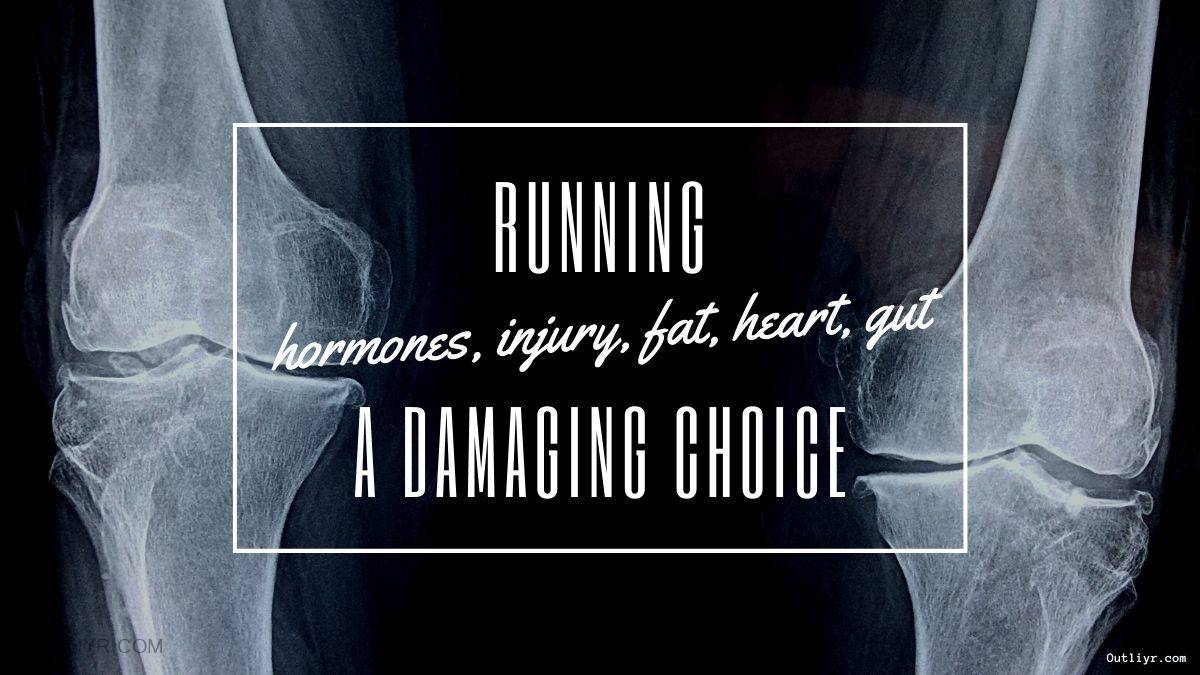 Art highlights the perils of endurance exercise in this excellent podcast episode:

I hated running but did it daily.

My two-decade competitive athletic career forced me to.

“Almost half of all recreational runners incur injuries, mostly relating to knees, calves or Achilles tendons, and the level of risk is equally high whatever your age, gender or running experience.”

If you’re an avid runner, listen up.

Running has a dark side. Here’s what you don’t often hear about this dangerous activity.

Done wrong or in excess, running can break down the body, dysregulate hormones, reinforce bad habits, and lead to overtraining symptoms.

Ever see a sprinter and an ultra-marathoner side-by-side?

Probably not, since they compete in very different events, but I’ll spare you the sight. They look very different and the sprinter looks healthier. Why?

Hormones have a tremendous effect on nearly every part of your physiology. They control the way you look, feel, and act.

Long-distance running has detrimental effects on both stress and growth hormones.

One of the main stress hormones, cortisol shifts your body into performance mode for exercise. Whether exercise or a deadline at work, you need cortisol in part for energy production. It fluctuates naturally, but extended exercise can keep cortisol artificially elevated. Endurance athletes commonly have abnormal cortisol levels.

This 2005 study showed a temporary spike to the level seen in patients with Cushing Syndrome disease.

Why do prolonged cortisol spikes matter?

Cortisol breaks down muscle, the immune system, bone, can lead to type 2 diabetes, kills brain cells, and lead to fat gain. Effectively, it weakens the body.

Exercise and testosterone go hand in hand for weight lifters or sprinters. What about other athletes?

“It may also perhaps reflect a lowering of the set-point (i.e., readjustment) of the axis for what is deemed a necessary minimal amount of circulating testosterone for proper physiological function…”

Ladies are not exempt from sex-hormone issues either.

The problem of low-testosterone in tandem with chronic cortisol should make you reconsider your exercise routine.

Together they are a one-two punch into the loathed skinny-fat syndrome. It makes sense.

Endurance activity is long and grueling. Your body does not know when and if it will end and it needs a lot of energy. So it pulls from your body fat but also muscle since it cannot convert body fat fast enough. At rest, muscle burns more calories — in times of scarcity that becomes too costly.

Why would the body hold on to metabolically costly muscle?

Yes, your body would rather shed muscle and hold on to metabolically precious body fat.

Athletes like 33-year-old Ryan Hall have first-hand experiences with chronically low-testosterone. I doubt the U.S. record holder in the half-marathon would throw the towel in and quit easily. You can imagine he must have felt pretty crumby to give up running and retire.

I found a comparison of the gravitational forces of common every day activities:

At the high end, running subjects you to three times the gravitational force of standing. Force and injury are closely related. It’s no surprise that lower extremity running injuries fluctuate between 19-79 percent depending on the runner’s experience.

Routinely performing activities like foam rolling and stretching can help, but also add considerable time to an already lengthy workout.

I ran a quick Google Search of running and came across a surprising amount of resources dedicated to running, injuries, and pain management. I came across ads for clinics, prevention articles, news, and other people searching for relations between nearly every body part and running.

So far I’ve managed to avoid it, but one in four runners does not.

The condition likely comes from an imbalance between the muscles on either side of the knee: the quadriceps and hamstrings.

Recommendations for those suffering from runner’s knee include stretching, hip-strengthening, foam rolling, changing footwear, physical therapy, or hardest of all, rest.

I’m part of the not-so-minority to deal with the sharp unrelenting pain known as shin splints.

It can come from running too much, ramping your speed too fast, the wrong footwear, or general overuse.

For me, it came back worse every sports season since high-school. By my Junior year of college I would collapse during halftime with my feet elevated in the air, wincing from intense pain.

Yet I didn’t stop. I kept running and it only got worse.

After knee issues, talk to veteran runners and you’ll hear battle stories regarding hips. Such as this runner,

“Like most runners, I have a good leg and a bad leg. On good days, I can run my commute and train for marathons, on bad days, I collapse to one side and compensate through my pelvis as I run.“

Something as basic as a tight hip doesn’t sound serious. Chronically, however, it can cause imbalances in stride. Eventually degrading running form and potentially leading to one leg becoming longer than the other.

That causes pain in other parts of the body, notably the neck and back.

Doesn’t sound like my idea of a good time.

You gut can handle a beating, but maybe not long-distance running.

During exercise, blood moves from the gut to nutrient-hungry muscles. Not just a little bit, but in some cases up to 80 percent.

How long are your runs?

90 minutes at a challenging pace caused small intestine damage and increased intestinal permeability (the basis for leaky gut) in a group of active runners.

Between 30-90 percent of people exhibit gastrointestinal distress symptoms during exercise and especially running.

Long, low-level exercise strengthens the heart, no surprises there.

The benefits of a stronger heart come down to the uniformity and evenness of the strengthening. For example, you wouldn’t upgrade three of your four car tires for off-roading and expect to be safe. But that’s similar to the effect of running without adding other training types.

18 percent of a group of 55 competitive triathletes showed impairments to their heart muscle.

Running overly strengthens the left ventricle of the heart. In extreme cases it leads to sudden cardiac death, killing the athlete.

Too much of a good thing is not always better.

You activate your fight-or-flight sympathetic nervous system when you run. Quite literally, the “flight” in “fight-or-flight” comes from running.

Athletes adapt to the demands of running, and learn to tune out the signs of overtraining. It’s not just athletes though. Without ample recovery, nourishment, or sleep the body can have a hard time with the addition of running.

Unlike other forms of exercise, runners can easily push through a little soreness or signs they need a break. A “light run” doesn’t count as recovery if you run ten miles with a heart rate of 180 beats per minute. Yes, I’ve heard many such stories.

How to Design a Proper Running Program

Running should be as simple as grabbing your shoes and getting outside. Unfortunately, it isn’t.

Your running form, the type and age of your shoes, the surface you run on, the way you breathe, and a number of other factors can drastically alter how running affects you.

To begin with, most runners have terrible form. Not my words, but those of running coaches.

It’s hard to know who to trust when it comes to running form. I had “concerned” family friends give me tips directly opposing those from sports coaches. And then running specialists with a different opinion than the others.

From an orthopedic standpoint, Dr. Gonzalez-Lomas wants runners to pay attention to:

“How their foot strikes the ground; if they pronate when they foot-stride; if they don’t have strong hip stabilizers…”

Even the best runners around still need to unlearn bad technique and learn proper running.

A secondary consideration to many uninjured (novice) runners, the surface and your shoes make a big difference.

Those deciding to start running as part of a couch-to-5K type of challenge miss this idea completely.

I’m as guilty as anyone. I can easily bring back my shin splints in a session or two by wearing my old “maximalist” shoes And with a vengeance. What do I wear now?

An ultra-low-profile type of shoes with absolutely zero padding. By removing the shoe technology, I forced my body to strengthen my small stabilizer muscles, helping prevent injury. I wrote about this in a review on barefoot minimalist shoes.

Frequently running more than a few miles on concrete doesn’t agree with me. Grass and softer surfaces no problem, but not concrete.

What works for one person often doesn’t always work for others.

Avoiding the Dangers: Tips For Runners and The Rest Of Us

It’s not all doom and gloom. If you like running, you can continue, armed with knowledge on making it safer and more effective. For the rest of us, we have plenty of other great options.

Running addicts have a few important things to add to their repertoire.

Together these two tips will extend and improve your running career, and mitigate injury risk.

Everyone else can enjoy a walk in the sun, a hike with friends, or any outdoor micro-movements. Work your way up to sprinting occasionally, and savor your extra time.

Running isn’t the only way to build your cardiovascular system. Our ancestors moved around a lot, but they certainly didn’t run hundreds of miles per week.

Ultimately the best exercise is the one you can complete consistently.

Whether running or something else, get out there and get after it.