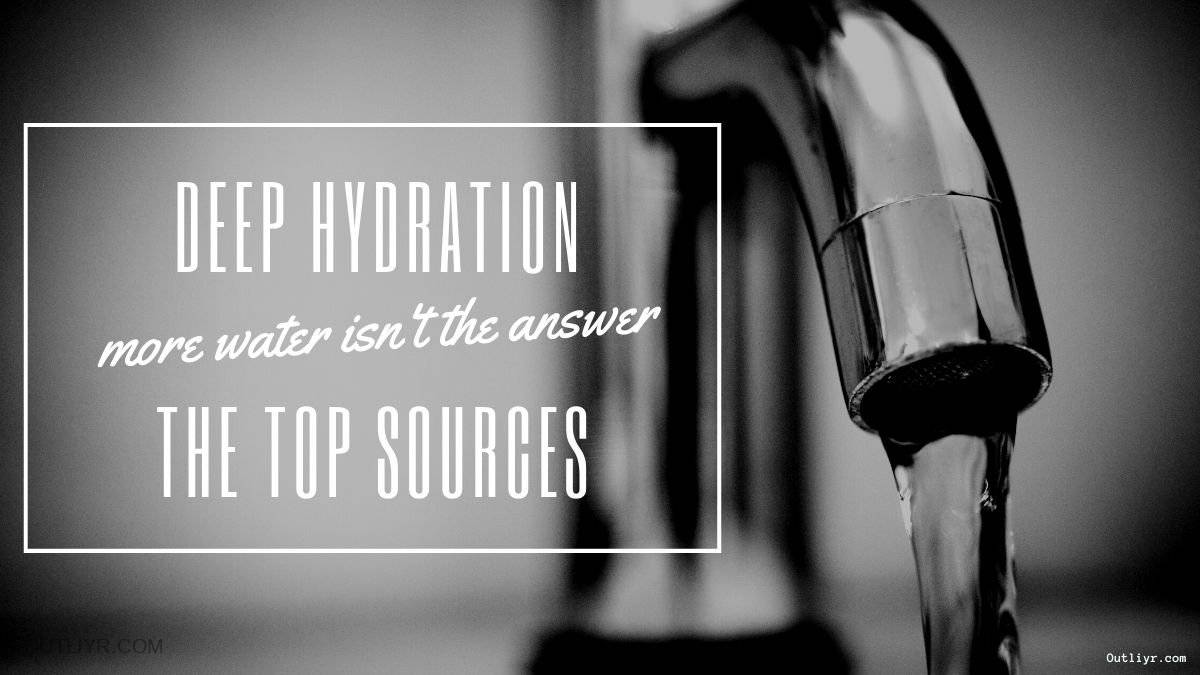 Gone are the days of chugging water in the name of hydration.

The latest research suggests that deep, effective hydration comes from frequent movement, certain foods, and lifestyle factors paired with only a moderate water intake. I will explain the benefits of optimal hydration, and tips on hydrating without spending your day searching for bathrooms.

The Important Benefits of Adequate Hydration

A researcher named Dr. Pollack determined that when measured by the number of molecules in the body, water makes up 99 out of every 100!

Unsurprisingly then, hydration has a lot of responsibilities. Everything from keeping energy high to improving brain function.

Before reaching for the brain-enhancing apps, pills, and powders, consider how much you’ve had to drink.

In the study, two percent amounted to about 33 ounces, the equivalent of two large glasses of water (or the above Hydroflask).

We lose about 100 ounces or three times that amount every day through breathing, sweat, urine, and bowel movements alone.

Daily water loss can double that to 200 ounces for heavy exercisers!

Wake up in a funk? Not feeling motivated?

Low mood clocks in as a primary indicator of dehydration and women may experience worse symptoms than men. Sometimes a glass of water with a pinch of salt added can put you back on the right track.

Carbs, calories and macros may be only part of the weight loss equation.

In reviewing various studies, I found more than one researcher that concluded:

“…hydration leads to body weight loss, mainly through a decrease in feeding, and a loss of fat, through increased lipolysis.”

Although most of the studies in the above review took place in animals, the researcher believes that the results likely transfer to humans.

4. Burning Calories With No Extra Effort

Imagine getting to avoid a monotonous, time-sucking run but still burning the calories.

A group of German researchers found that subjects drinking 500ml before each meal boosted their base metabolic rate by 30 percent in both men and women. A higher metabolism means more effortless calories burning.

Over the course of a year, increased metabolism from three extra glasses of water per day can burn the equivalent of 73,000 calories!

Looking to burn even more calories?

Forking over big bucks for smooth radiant skin? Any esthetician worth their jade roller knows that hydration starts from within.

Only then add the beauty creams, serums, moisturizers, and anti-aging kits. Watch your complexion improve.

Supplement stacks get expensive fast. Get bigger bang for your buck.

Water acts as a solvent, dissolving and transporting a staggering array of compounds throughout the body. In other words, get more from less food, vitamins, minerals, and fringe longevity molecules.

7. Keeping You Cool During Hot Summers

Not exactly breaking news, but sweat cools the body to keep internal temperatures in a safe range.

8. Acting as an Internal Shock Absorber

Water protects our organs, lubricates the senses, greases tissues throughout the body, and even absorbs shock. Good news for runners.

No wonder fluid surrounds the brain.

During times of drought, the brain rations water to the other organs.

Your brain, heart, and liver get priority. Detoxification, digestion, and other functions unimportant to your immediate survival wait.

I know, I said it… detoxification. A word that brings with it controversy; and expertly marketed drinks filled with celery juice, cayenne, raw honey, and apple cider vinegar. But it is real.

Dangerous chemicals from everyday life make their way into your body. Your liver and kidneys protect you. The process works well until detox organs cannot keep up.

Where do these toxins go?

Hydrating favors process number one, so you can go about your day without worrying about heavy metals or finding detox drinks.

Your cardiovascular system feels the drought of dehydration. Water reaches your organs through the blood stream.

Blood vessels require lots of water to expand and contract.

two percent dehydration may not sound like much, but it can impact this expansion and contraction more than you would expect. Stavros Kavouras, a researcher investigating the cardiovascular system says (emphasis mine):

It does not stop there.

Dogma aside, the best diets keep blood sugar stable. The less peaks and valleys, the healthier.

Concentrated sugar in your blood stream (hyperglycemia) takes a lot of work to clear.

Sufficient hydration lessens the load on your pancreas by diluting your blood. A great way to avoid diabetes.

The Best Hydrating Electrolyte Solutions In Your Home

Water alone is NOT hydrating.

Though most people can stand to drink more, their water lacks a crucial ingredient: electrolytes.

Electrolytes are substances that make a solution conduct electricity. Since the body runs on electricity, this helps transmit signals and information. Massive quantities of water in the absence of electrolytes can kill, a condition known as hyperhydration.

The simple solution? Before you go to sleep prepare a little cocktail for the morning:

Mix it in a glass and keep it by your bed. Start the day by immediately downing the concoction.

Sodium is the chief electrolyte in your blood.

Chloride is a trace electrolyte.

Citrus provides other electrolytes including potassium and trace amounts of calcium.

A New State of Matter

All water is not created equal.

I am talking about a different type of water. One that surrounds you but probably haven’t given it a second thought.

Suppose that you get a cut. Knowing that you are mostly water, you would imagine a large pool of water would form on the floor. Trivial amounts of blood would appear, but the dozens of pounds of water inside you?

When making incisions, surgeons often wondered the same thing. Where is all this water?

In elementary school we learned about three states of matter. Take H2O for example:

What about Jell-O? Not quite a solid, not quite a liquid. Its gelatinous form does not fit nicely into one of the above three categories.

This is the same type of water inside your body. Not Jell-O, but water in a gelatinous form.

Dr. Gerald Pollack discovered a new gel-like water state with properties unlike the others.

So where can you find this new type of water?

All over! Common sources include produce, certain foods, and spring water.

Produce spends its time in the sun, which charges and makes the water inside gelatinous. Fiber in produce locks that water inside the plant. The liquid inside plants is the perfect source of more potent, extended-release hydration.

How much water is in a plant?

A surprising amount! Lettuce, for example, contains up of 96 percent water.

No produce, no worry. Other foods can pack an electrolyte punch.

Camels are built for the desert. Their humps power multi-day treks through the barren lands. Contrary to popular belief, the camel’s humps are not made of water. Instead, they rely on huge fat stores (up to 80 pounds) for energy and hydration.

A tribe of desert people called the Bedouins thrive in deserts. They learned from the camels. Bedouins prepare dishes with generous portions of electrolyte-rich sources like milk (camel or goat), goat butter, and ghee. Structured water in these foods serves as a powerful tool in their ability to tolerate inhospitable climates.

I love chia seeds. And not just because the Tarahumara fueled their marathons with these tiny powerhouses.

What makes chia seeds so special?

To summarize the wonders of chia as explained in a book called Quench (emphasis mine):

Now that we have food rich in structured water, we can use modern science to make it more bioavailable.

It is easy to get carried away on the fruits. Growing up on smoothies brimming with fruits and vegetables, I had a hard time letting go of my sugar binges disguised under the veil of healthy green drinks.

Several bananas, apple, mango, a juice base… the sugar in my (mostly fruit) concoctions quickly added up. Lacking fiber to slow down absorption, I mistakenly sent my blood sugar through the roof.

I should have flipped it.

Add enough fruit to enjoy the taste, but generously serve the non-fruit ingredients.

For our purposes, smoothies beat juices for the abundance of fiber. Fiber makes the sugar in fruits gentler on your body.

What goes into a good smoothie?

I can’t imagine a time in history with more beverage options available to us. Don’t limit yourself. Consider coconut water or coconut milk. They taste great (if I do say so myself) and are high in hydrating fats and electrolytes.

Berries are chock-full of vitamins, minerals, antioxidants and beneficial compounds.

If you handle uncooked vegetables, toss them in. I sometimes lightly steam my greens first to deactivate anti-nutrients in certain raw vegetables. Pro tip: add the water from the steamed vegetables to your smoothie base to replenish nutrients lost during the steaming process!

Combine everything in a large blender and mix to your desired consistency.

More concerning yet, are the unknowns.

Foods such as grains, starches, meats, cheeses work against our hydration.

Ever feel exhausted from a long day of travel? Blaming jet lag despite flying just one state over? Consider dehydration.

When you do fly, add extra water and a pinch of chia seeds to it. Make an extra effort to move around the cabin whenever possible.

By now you’ve probably heard “sitting is the new smoking”. It turns out to have some validity.

Long sedentary periods cause cellular waste to accumulate, leading to inflammation and a decline in health.

You don’t need to complete a grueling CrossFit WOD, or a Spartan Race. Something as simple as easy movements or small micro-workouts help hydration charge your cells.

One study investigated the effect of fidgeting on long periods of sitting. They concluded that fidgeting had a significant positive impact.

Setting a timer to move (or at least fidget) every 30 minutes can make all the difference to your mobility, stiffness, and post-work energy. Even more so while flying.

Already sip on water throughout the day?

Science is recognizing that hydration goes far beyond your drinking habits.

High-quality fruits and vegetables can hydrate you on a deeper level.

A simple hydration practice comes down to the following

Your hydrated body will perform at its peak. Give it a try for a few weeks and let me know the difference you feel.