22 Discoveries From 553+ Successful Fasts (and Many Unsuccessful) 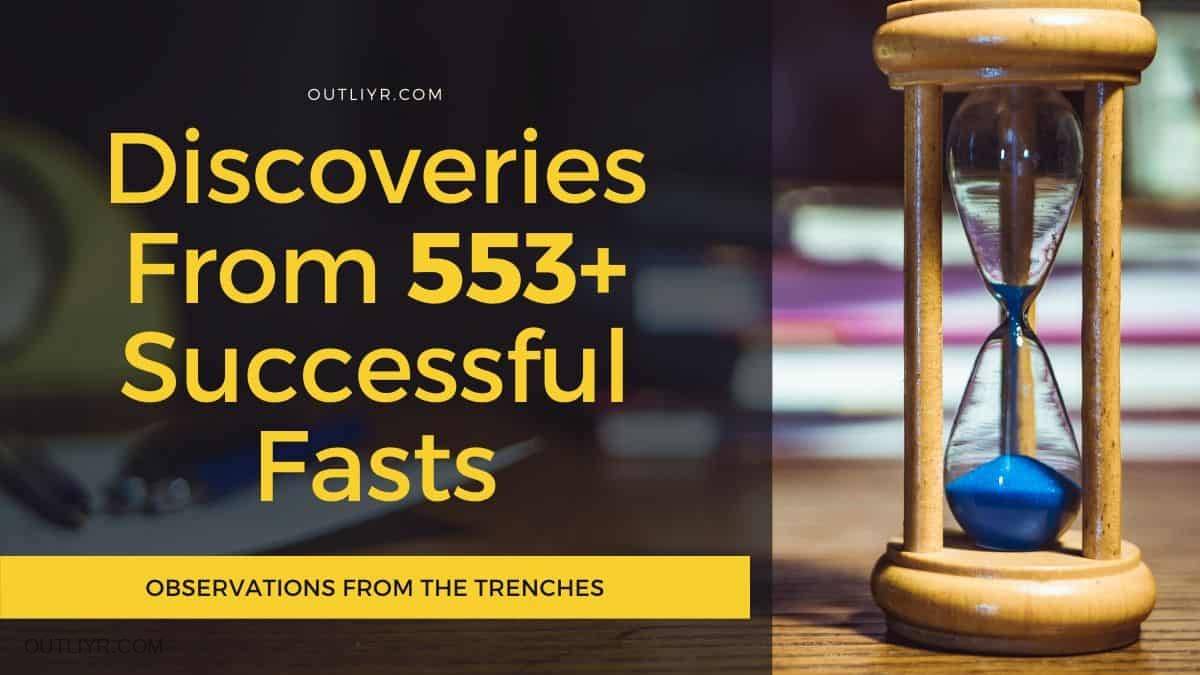 I began fasting on a weekly basis in 2013, and intermittent fasting shortly thereafter. Having tried it all, I prefer 24-hour fasts.

I’ve missed weeks since 2013, but have been quite consistent. With hundreds of 24-hour fasts under my belt, I’ll share observations from my successes, failures, and learnings along the way.

Every Fast is Different

No two fasts are the same. No matter how many variables I hold constant.

Some feel harder than others. Especially when I haven’t fasted in a while. My energy stays high on some, and on others I loathe exercise. I chalk this up to stress and other lifestyle factors.

Going into the fast fat-adapted helps.

When deep in ketosis I could almost accidentally an entire 24 hours.

Related to the above, become metabolically flexible.

Essential to keto and intermittent fasting long-term success, fat-adaptation does not last forever.

Recently, I’ve snacked more than usual. I eventually found some nasty ingredients in one of the snacks. No wonder fasts have been harder.

Fasting is a Stressor

The body’s extremely resilient and can handle lots of stress. Too much beneficial eustress becomes distress. Over time leading to inflammation, inability to repair and disease.

I sleep poorly when I skip dinner.

Nine hours without food does it. I usually sleep at 10:30, and when I skip my afternoon snack I toss-and-turn more. Biohackers often report fasting-induced insomnia.

I also wake up earlier than normal. No matter what I try, my biology simply does not want to stay asleep. This could be an evolutionary mechanism to give more time to hunting. Once or twice a week though, probably fine.

Fasting exacerbates an hour or two of sleep loss.

Combined, it makes for a harder fast.

Hunger doesn’t build. It comes and goes in waves.

I used to eat breakfast at 6:30 AM every morning.

Then one day I replaced it with a glass of water and a walk.

I discovered that my “hunger” wasn’t a real physical hunger but rather mental.

I thought walking would make me hunger.

Nope. Walking helps. I also get every single one of the benefits of walking 10,000 steps daily.

Moving more subjectively speeds up the hunger wave to make it pass faster. I don’t walk for long. Ten to twenty minutes. Blood pumping, I sit back down satiated and focused.

In a low-insulin state you burn more body-fat than normal.

Bodybuilders have used this secret of fasted walks to burn body fat for a long time. It works great. Stacked with a (temporary) zero-calorie diet melts the pounds away.

It’s not some nootropic concoction.

Clean, filtered water and with an added a mineral-rich salt. Electrolytes and deep hydration.

… you get the point. ACV is virtually a-caloric, so it doesn’t break the fast, in my opinion.

I worried fasting would cripple my athletic performance.

Fasted exercise isn’t easier by any means. Especially not for efforts in the one to four-minute range. Shorter or longer than that and you’re good. I’ve done HIIT workouts (in that bad effort time range) deep into fasts and felt lousy afterward.

I’ve had great strength, power, and cardio/conditioning fasted workouts. Think it’s not possible? Talk to Peter Attia who mentioned on a podcast that he deadlifted 495 pounds on day seven of a fast.

I always thought I ate only when hungry.

Physically I can go far beyond 24 hours without real hunger as I’ve done many times.

I had to come to terms with the psychological drive to eat. I told myself a story for years that I don’t eat emotionally nor do I even really enjoy the act of eating. Fasting exposed my fabricated self-talk.

Especially in longer fasts, the psychological urge rears its ugly head over and over.

Hunger hormones chill after a fast.

One called Ghrelin tempts you to quit. After all, that large tub of ice cream won’t eat itself.

Of course you’re not eating anything during the fast. But the process itself brings both hormones back into healthy ranges. Coming out of fasts, friends would ask why I couldn’t handle fourth and fifth servings anymore.

Not many things reset the palate.

Completely removing complex tastes gives the taste buds time to recalibrate and regenerate for the moment you indulge.

You’ll appreciate the smaller nuances of flavor and taste things that you didn’t before. I could never pick out specific herbs and flavors in meals before fasting.

Everyone Has a Unique “Sticking Window”

Every fast has a hard section.

For some, it’s the first few hours. For others it isn’t until they go to sleep. Others struggle with the end.

It can also depend on when you start fasting. I like to start in the late afternoon. On one day fasts my “sticking point” is about an hour before bedtime, generally nine hours in. It isn’t bad though. Multi-day fasts hit me harder. Especially between hour 32 and 40.

Brain Function Can Improve After Adaptation

It’s a large reason I quit my 6:30 AM breakfast. Every morning I’d walked around in a heavy brain fog with zero ability to focus.

Fasting completely changed that. Not something I’m eager to go back to.

Your internal pharmacy whips up some potent stuff.

The catecholamines released from fasting stimulates an adrenaline release and with that heightened brainpower, focus, and physical energy.

Keto disrupted my sense of smell.

It hasn’t been as sharp since I shifted my diet. Might be aging, I’m not sure.

Midway into my first fast I immediately noticed that I completely regained my sense of smell. Fasting heightened my other senses too. I could hear and see better than normal. Obviously I didn’t have the ability to test my sense of taste while fasting, but I can imagine it improved as well.

I write it off as placebo the first few times, but the pattern became clear.

Cooking takes time. LOTS of it.

More than I realized. And I only eat two meals per day. Whether you cook for yourself or order out, it can easily take an hour or two per day.

Chopping, pre-heating, cooking, cooling, and then eating each don’t take too long. Until you put them together. My time tracking software showed that I averaged 1.75 hours per day preparing and eating.

Once you master the physical component, there’s the psychological.

There’s an uncanny ability for life to seemingly conspire against your fasts:

From the social event to the random situation, I’ve skipped many fasts. Seldom for physical reasons. A cold shower lasts a few minutes. A 24 hour fast is… exactly that, long enough for overwhelm and uneasiness to set in. Sometimes they do.

Few people notice this one.

As a science nerd interested in the breath, I discovered it, but not for a while.

For whatever reason, towards the end of my fast I could hold my breath longer than normal. It came up when reviewing my maximum breath-hold time. I followed the Wim Hof protocol.

Fasted sessions produced a large uptick in the time, while the following day post-eating the time regressed back towards normal.

Part of my inner peace comes from knowing that I’ll do great physically and psychologically if I cannot access food for a day or three.

It’s now second nature. Doing well without food is a testament to the resiliency of humans.

You can handle a lot more than you think.

Fasting: A Useful Tool for Your Toolbox

Fasting warrants all the hype. A very real part of our ancestors existence is now heralded a 21st century panacea.

Like all good things, it’s possible to overdo fasting. Too much cellular senescence and autophagy and you moved into a catabolic state of body breakdown.

Done right fasting is a tremendous tool to build resilience, reshape health, and add an element of simplicity. Just don’t let it dominate your life.