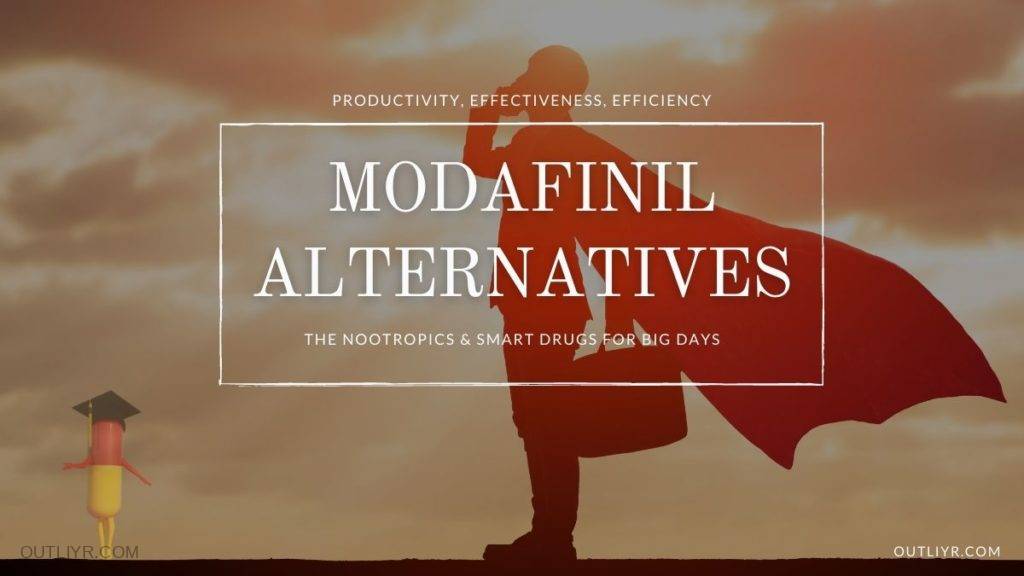 Imagine a pill capable of supercharging the brain. You’d master skills in no time. See patterns where others can’t. Access the hyper-productive flow state at will.

In the movie Limitless, Bradley Cooper’s character came across a smart drug granting these quasi-superpowers to an otherwise ordinary man. While a pipe-dream, biohackers have dubbed off-label use of a prescription drug called modafinil the next best thing.

If you're obsessed with self-optimization and performing at your peak, you've likely heard of modafinil. But there are other great options. Click To Tweet

But it’s not for everyone. Some people don’t metabolize the drug well. Others can’t get a prescription. Or perhaps you’re looking for a legal, easy-to-get alternative.

Modafinil may be proclaimed the king of smart drugs, but it’s not the only option. Today I’ll cover the best over-the-counter modafinil alternatives I’ve found.

Like most drugs, we’re still uncovering the exact mechanisms behind how moda works.

One thing’s certain. Every drug affects the body’s many systems differently. According to the researchers at SelfHacked, modafinil works by:

Most nootropics work on at least one of the above neurotransmitters.

No other nootropic compound has the same pronounced 12+ hour effects. But some feel just as potent. When evaluating nootropics, I want to feel a pronounced mental or physical energy boost. Ideally both.

I’ve reduced my smart drug intake as I’ve gotten into bioharmonizing. But on days I want an extra “pick-me-up”, I’ll dip into my nootropics stash. Each of the following compounds delivers.

Note: legality of nootropics varies from country to country, state to state. Please research your local regulations. The following is not medical advice but rather for entertainment purposes only. Always talk to your doctor before modifying your current lifestyle practices.

Unlike other nootropics, the benefits of Qualia Mind persist even when you run out. Click To Tweet

Mind works on a simple premise: clinical doses of a wide variety of powerful ingredients work synergistically far better than mega doses of a single compound. After thousands of hours of research and hundreds of formulations, the team got it right.

Qualia Mind also has an impressive study backing it. Something few supplement companies would risk putting their products through. After 5 days of Qualia Mind supplementation, participants:

Keep in mind that these are nootropics customers, not sick patients or animals (like the populations studied by most nootropics research). Their results likely transfer to other healthy nootropics users.

Mind is leagues ahead of unregulated smart drug powders. The catch? Quality costs more. Check it out below on Amazon or get a discount on their website:

This one may be shocking. Yes, nicotine has serious addiction potential. Whether it improves or destroys your health depends on:

Nicotine, not chemical-laced industrial tobacco, is one of the most potent cognitive enhancers available. I know a neuroscience professor that *hypothetically* recommended it. Particularly as a replacement for the popular study drug Adderall.

Nicotine research backs up his claims:

Responsible doses of 1-3mg (taken orally) feels very different than what you’d expect from nicotine. Not at all like smoking a cigarette. To be conservative, I limit use to twice per week maximum.

Biohackers prefer nicotine gum, lozenges, toothpicks, or other non-smoking forms of administration. The fewer ingredients in the product, the better.

I usually avoid synthetic smart drugs. After all, the main difference between them and pharmaceuticals is that pharma is more tightly regulated (and therefore higher quality). The racetam class of nootropics has been studied for decades. Clinically, in some countries, phenylpiracetam goes by the name Phenotropil.

Unlike other racetams, phenylpiracetam is more stimulating. This likely explains its physical effects:

Anecdotal experience throughout the web suggests performance gains in the young, healthy experimenters as well. I’ve had good experiences with it too.

Cognitively, phenylpiracetam is used for:

Tolerance builds quickly. I noticed that its effects diminished when I took it more than once per week.

Sulbutiamine is two vitamin B1 molecules synthetically bound together. This makes it more fat-soluble than vitamin B1 by itself. Thus it’s able to pass the blood-brain barrier.

Giving the brain a potent dose of vitamin B1 (also called thiamine).

Which leads to the two glaring drawbacks:

The benefits of sulbutiamine may outweigh the drawbacks:

Despite most of the studies occuring in animals, it seems promising for athletes and those deficient in thiamine.

I like the idea of sulbutiamine as a brain-absorbable form of vitamin B1.

“…Adrafinil is [a] novel behavioral stimulant with cognitive enhancing potential.”

Effects on behavior and cognition in aged canines

I thought I had found the holy grail of smart drugs. Adrafinil was over-the-counter with pronounced, long-lasting effects, and low-cost.

Adrafinil is modafinil’s inferior sibling. This molecular is actually converted into modafinil once inside the body. About 60 minutes after consumption.

Before I got my hands on modafinil, I tried adrafinil. While the effects blow most grey-area nootropics out of the water, I stopped taking it due to one major issue:

Side effects. According to one study: liver toxicity, stomach pain, skin irritation, anxiety.

Theacrine, also called Teacrine, is a plant-derived compound similar to caffeine. The plant grows in the Amazon and is related to cacao. As a caffeine analogue, it activates similar pathways but with a few big differences.

Unlike caffeine, early research suggests theacrine may be anti-inflammatory and antioxidant properties.

Theacrine is the caffeine analogue loved for its motivation, cognition, energy, and mood lifting. Click To Tweet

I prefer theacrine to caffeine because it’s:

Cerebrolysine is one of several hot nootropics this year. Popular outside of the USA, this combination of amino acids and proteins is derived from pig brain. If that doesn’t turn you away, SelfHacked describes the pathways impacted by cerebrolysine:

Some research supports its use in:

Keep your eye on this one. I expect cerebrolysine to star in upcoming research.

Dihexa is also a string of amino acids, known as a peptide. For biochemistry geeks, it’s called “N-hexanoic-Tyr-Ile-(6) aminohexanoic amide”. Dihexa is the unofficial biohacker’s nootropic of the year with pronounced effects on cognition. As a peptide, it falls under the category of nutritional nootropics and is therefore likely safer than most.

“Dihexa is a first-in-class compound that is orally active, penetrates the blood-brain barrier, and facilitates memory consolidation and retrieval.”

A New Target for the Treatment of Alzheimer’s Disease

Washington State University researchers discovered the drug in the ’90s. Unfortunately, it’s also relatively new and has been studied mostly in animals.

As a new oligopeptide, dihexa is harder to find and expensive. Dig up a good, clean source and you’ll know why some call it the holy grail of safe and effective nootropics (and email me the source 🙂).

I differentiate between smart drugs and nootropics. In my opinion:

Adaptogens, peptides, potentially algae, grass-fed organs and the right amounts of vitamins and minerals all fall into the nootropics category. Nootropics have less discernable but longer-lasting effects. They bioharmonize, working with the body rather than against it.

But every once-in-a-while, smart drugs can fuel a productive day or important event. The above supplements are some of my favorite modafinil alternatives:

I’m especially fond of the bolded. One is a researched all-in-one formula. The other two are effective and theoretically safe. But as peptides are an emerging field, they’re less researched and harder to get. This is by no means a comprehensive list. I’ve tried and still have dozens of powders lying around from my college days. Many of which will I’ll never use.

I’m coming to accept that the Limitless pill won’t be here any time soon. In the meantime, I’m building up my brain with an arsenal of healthy nootropics. What about you? Would you take a pill that granted you temporary supra-human abilities at the cost of your healthspan?