The Only 3 Apigenin Supplements Worth Buying [2022 Review & Comparison] 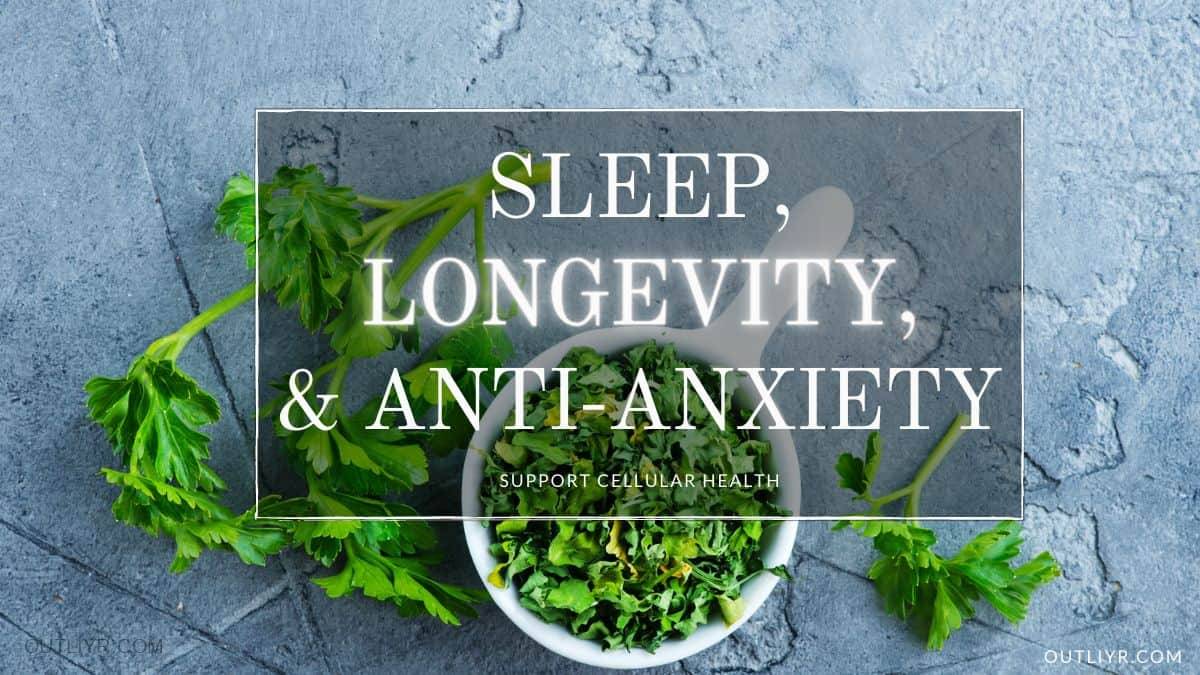 When researching the hottest longevity supplements, you may come across one called apigenin.

Could apigenin be a missing link?

Consuming apigenin is associated with:

But here’s the thing…

Most apigenin supplements don’t work. You excrete them long before the molecule can exert health benefits.

Today’s article will cover the best apigenin supplements with high bioavailability, how it works, and natural food sources.

Like other promising bioflavonoid longevity supplements, you won’t actually absorb enough apigenin to make a difference. Your stomach acid and digestive process destroy the delicate molecule before they can improve your wellbeing and extend your healthspan.

As several studies have put it,

“Due to apigenin’s limitations on absorption and bioavailability, novel carriers would need to be developed to enhance the oral bioavailability of apigenin”

Pharmacokinetic properties and drug interactions of apigenin, a natural flavone

You couldn’t buy a single apigenin supplement on Amazon until 2022.

So if you’re wondering where to buy apigenin, these are your best options.

Renue by Science (previously Alive by Science) has proven itself over and over again as the world’s top source for supplements with maximal bioavailability. Their liposomes have the smallest particle size possible to ensure that you absorb as much as possible.

After production in a cGMP-Certified facility, their liposomal apigenin undergoes rigorous third-party lab testing for both safety and purity.

Since it’s a potent liposomal formula, I like that they used a lower apigenin dose. Your body absorbs it slowly over time. Biomimicking an amount just a tad above what you’d receive from a healthy apigenin-food-rich diet. This also minimizes the potential downsides of supplementation.

Renue by Science’s liposomal apigenin is the best overall, to maximize benefits while minimizing side effects.

Use the exclusive code URBAN for 10% off

The only other major supplement manufacturer selling apigenin is Codeage. I generally like Codeage’s products but quality-wise, but they’re a step below Renue.

Codeage started offering this product recently, in November of 2021. Their apigenin comes from Matricaria chamomile extract. Each capsule contains 50mg of liposomal apigenin, which is about the upper limit of what I’d consider supplementing.

They claim to produce the supplement in the USA, but I could not confirm where they source their raw ingredients. If you want proof of their lab testing, you’ll have to email their support team.

Overall, Codeage’s apigenin is good value but we do not know the efficacy of their liposomal technology.

At the time of this research, the only other primary manufacturer of liposomal apigenin is a company called Cenffitio.

Each soft gel contains a total dose of 1,000mg of powder. If you don’t do well with large pills, you’ll want something else.

This is the only product that contains other powerful longevity ingredients. Including fisetin, quercetin, and theaflavins. They formulated the supplement as a senolytic activator.

I have several issues with Cenffitio’s apigenin complex. First, we have no idea how effective their liposomes are. Second, the senolytics included are not liposomal (and thus won’t absorb well). Lastly, they claim to make the products in the USA. But if you follow the paper trail, it appears that the ingredients come from China.

If you’re looking for a longevity stack containing liposomal apigenin and other synergistic ingredients, and don’t mind that the company engages in false advertising, look into Cenffitio.

Apigenin is a bioactive flavone (a subset of polyphenols) that occurs naturally in plants and other foods. Research has discovered notable antioxidant, anti-microbial, neuroprotective, anti-inflammatory, detoxification, immune health, and cognitive benefits.

A primary way apigenin is thought to work is by inhibiting an enzyme called CD38. Which, in turn, boosts NAD+ levels leading to increased youthfulness, lifespan, and healthspan.

You can get appreciable amounts by eating loads of plants and the following foods.

A wide variety of plants, herbs, and other commonly consumed ingredients contain apigenin.

Several studies have confirmed the safety of apigenin-rich foods.

The foods highest in apigenin include:

Additionally, you can get some in red wine, beer, and as an active ingredient in Gingko Biloba supplements.

I personally consume many of the above foods, and add extra parsley to my smoothies for extra apigenin.

Apigenin, like many of the other flavonoids, shows tremendous potential with one glaring issue.

Humans eliminate the molecule before it can exert the benefits found in research.

For this reason, most of the studies have been on animals and/or on chamomile drinks (a natural source) standardized to specific apigenin levels.

Another powerful option is to use bioavailable apigenin supplements.

It’s primarily used for increasing lifespan. Protecting the body against degeneration and disease.

A Review of Nutrients to Extend Healthspan and Avoid Cancer by Reducing the Amount of Protein Misfolding, Free Radicals, and Calcification

The heart is rich in energy-producing mitochondria. Its anti-oxidant and anti-inflammatory properties make it ideal to protect these “cellular power plants”.

According to a 2017 study, apigenin also reduces “…the level of blood fat by promoting cholesterol absorption and conversion, and accelerating reverse cholesterol transport. Apigenin also has a role in resisting oxidization and protecting blood vessels.”

This small 2008 trial found that it significantly reduced the recurrence of colon cancer.

These include “catalase (CAT) and superoxide dismutase (SOD), and glutathione (GSH)”.

As this research puts it, “Laboratory studies have demonstrated that apigenin promotes metal chelation, scavenges free radicals, and stimulates phase II detoxification enzymes in cell culture and in in vivo tumor models”.

The better the detox pathways work, the more effectively the body rids itself of toxicants.

Enhanced mood may seem like a strange benefit of a bioflavinoid, but early research is promising.

This paper sums it up nicely (emphasis mine),

“Apigenin possesses anxiolytic effects by acting as a benzodiazepine ligand, and has no muscle relaxant or sedative effects at normal dosages (3-10mg/kg bodyweight) but sedation was observed at 3 and 10-fold said dose.(30-100mg/kg bodyweight)”

Apigenin, a component of Matricaria recutita flowers, is a central benzodiazepine receptors-ligand with anxiolytic effects

Meaning that it works like Xanax but without muscle relaxation or sedation in normal doses. Other research found that chamomile (rich in apigenin), exerts “clinically meaningful” antidepressant effects.

Another trial found that chamomile extract has anti-anxiety effects in patients with generalized anxiety disorder.

Apigenin appears to have mild anxiety and depressing-reducing effects.

“When individual compounds were taken into consideration, an association with sleep quality was observed for naringenin and apigenin among flavonoids”

Apigenin appears to work by stimulating the GABAergic system.

Chamomile, and apigenin in particular, gently calm the brain for relaxation and sleep.

These benefits stem from its ability to protect the mitochondria-dense brain. Apigenin prevents mitochondrial toxicity from accumulating too much calcium (which becomes toxic to the cell).

It appears to reduce neuroinflammation and protect the blood-brain barrier.

If I sustained a TBI/concussion, I would consider supplementing apigenin.

It does this by activating AMPK and suppressing mTOR. Apigenin also inhibits cellular replication.

Another paper found that it activates both intrinsic and extrinsic apoptosis pathways.

Apigenin improves the metabolism of glucose and fat.

One study showed that apigenin has anti-diabetic effects, likely by allowing more glucose to enter cells for use (rather than being stored as fat).

It also restores glucose tolerance so that the body can better process sugar.

Apigenin helps the body better process sugar instead of storing it as fat.

One of the better-known effects of apigenin is its potent anti-inflammatory actions.

Back in 1999, scientists detailed a few of the known mechanisms:

One study found that a dose of apigenin decreased the stress hormone cortisol by 47.5 percent.

Yet few people realize use strategies to slow the breakdown of NAD+.

One enzyme responsible for breaking down NAD is called CD38.

Many of the flavinoids have become famous for their healthspan-increasing effects.

It does this by reducing how often the body misfolds proteins. Apigenin mimics the effects of calorie restriction.

Scientists often use worms to study longevity. In one such study, apigenin-activated genes related to anti-aging. These apigenin-treated worms lived with higher quality of life and greater stress resilience.

One of apigenin’s hypothesized mechanisms is protecting the integrity of genes.

Should You Supplement Apigenin?

Apigenin is a powerful bioflavonoid present in produce and other health foods.

As with others in this class, it suffers from the same low-bioavailability problem. You’ll metabolize and excrete most supplements before you have the chance to absorb anything.

Liposomal apigenin, however, drastically increases absorption so that it can produce many of exciting benefits.

Yet few companies currently offer it.

It’s not one of the first longevity supplements I’d consider. If you’re new, you can either get a pre-made formula, or start with ingredients like:

Nonetheless, high-quality apigenin can make a great addition to a longevity stack.

At least eat a diet rich in apigenin foods.

Do you take apigenin? Let me know your experience in the comments below.