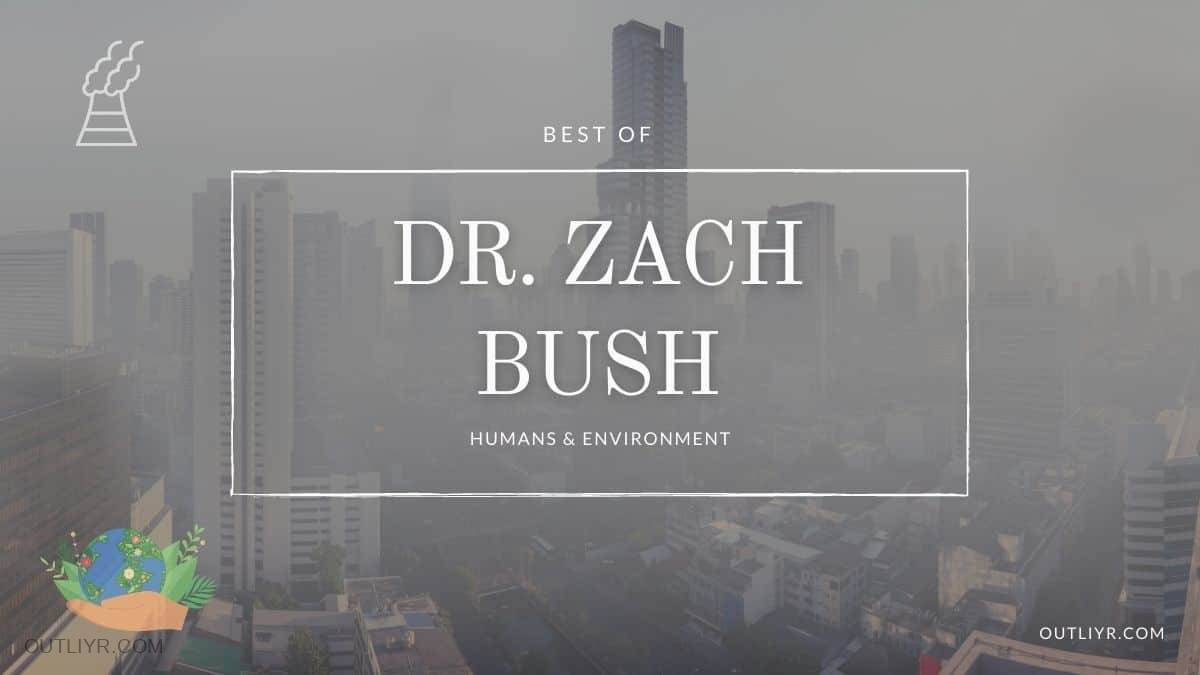 In 2020 I’ve focused on reduction. Creating more than I consume. I’ve unsubscribed from a dozen podcasts, slashed my RSS feed, freed myself from most email lists. But I keep those that challenge my deeply indoctrinated beliefs in tightly integrated stories.

“The instant you get caught in a belief system, you stop learning.”

Dr. Zach Bush delivers every time. I actively seek out his podcast appearances. Since discovering him in 2018, he’s shaped my interests, pursuits, and perspectives. I came in a science-backed skeptic, and emerged a raving fan. I’ve heard similar experiences among biohacker communities and the generally uninterested mainstream.

I’m confident Dr. Bush will broaden your perspectives. I’ll link some of his best appearances across different podcasts. Additionally, I’m including thought provoking highlights from his recent episodes. Grab your pencil and notepad, choose an episode, and get ready to walk away more informed.

First of all, who’s Zach Bush, MD and what makes him so special?

To oversimplify, Dr. Bush is a triple board-certified physician sitting at a unique intersection between allopathic Western medicine, end-of-life Hospice care, and environmental activism. But instead of cheering (or complaining) from the sidelines, Zach confronts the problems head on. He’s a natural healer, scientist, and a gift to the world.

His personal tagline is:

"Applying the rigor of science, strength of humanity, and the intelligence of nature to transform our health & our world." Click To Tweet

His thesis portrays the intrinsic link between humans and the natural intelligence of our environment. Yet at the same time, his teachings draw from biology, spirituality, chemistry, anthropology, farming, and modern medicine. Together his talks are digestible to both hypercritical skeptics and the deeply spiritual. Using enough health jargon to please health researchers without compromising accessibility to the layperson.

Unlike other health and wellness podcasts, Zach isn’t all doom and gloom. Despite painting honest portrayals of our trajectory, he ends every episode on an immensely positive note. Even when the rest of the world is frantic and panicked, you’ll leave his episodes feeling optimistic and hopeful.

ZachBushMD.com lists all podcast appearances (I recommend bookmarking it).

If you’re a visual learner, you can check out his work in other mediums. But his podcast appearances are second to none.

For a little preview of his talks, listen to this monologue. Podcaster Rich Roll dubbed it: “The Best Monologue EVER“.

Dr. Bush helps farmers convert from conventional to regenerative practices. Healing the planet by sequestering huge amounts of carbon from the atmosphere. While also increasing the farm’s profitability, the nutritional content of crops, and the sustainability of farming.

You can watch his film—called Farmers Footprint—documenting the experience transforming modern agriculture here:

Zach gained exposure as a guest on a digital news platform called The High Wire. Here he discussed the current medical situation and provided an alternative perspective:

No one knows soil better than Zach. But why does soil matter? It mostly boils down to your health & the environment:

Until I found these podcasts, I had a hard time piecing together how prevalent and highly toxic chemicals like Roundup—sprayed by the billions of pounds—could pass under the nose of regulators. Dr. Bush walks through just enough history to understand how we ended up here, the conditions and disease of over-exposure, potential paths forward, and how to personally protect yourself.

If you’re wondering if organic or farmers market food is worth it, these are the episodes you need. While I’ve listened to half a dozen others on the same topic, I’ve particularly enjoyed two:

To learn more about glyphosate, check out the following resource:

When two thought leaders get together to talk about a seemingly simple subject, listen up. Water is a topic we’re all intimately familiar with. But Viktor Schauberger’s 317 pages in The Water Wizard [Amazon] asserts that water is more than meets the eye. Dr. Bush and Dr. Mercola geek out on some of the deeper science behind water.

“Water is the ultimate scrubber system. It’s the ultimate mechanism in which we get toxins out of our body. It’s how we clear the natural exhaust and byproducts of cellular energy production”.

Drinking water alone won’t hydrate you. Nor does clear pee indicate hydration. As I wrote about in my guide to deep hydration, what you really need, is cellular water. And as you age, you lose the ability to transfer water into cells.

According to Zach, 100 percent of his patients are dehydrated (determined through a measurement called “phase angle”). Phase angle changes slowly since it measures your total population of ~70 trillion cells. Testing once or twice per year can show positive or negative lifestyle trends.

Phase angle measurement may be our best indicator of mitochondrial function and biological age. Click To Tweet

The kidneys are designed to fluid 55 gallons of fluid per day. Without adequate fluid, this detoxification system doesn’t work properly.

Electrolytes. Sodium, chloride, potassium, magnesium, and other minerals infuse water with energy. From The Magnesium Miracle [Amazon] I learned that virtually everyone today is magnesium deficient. You could spend months on supplements, gradually increasing your mineral levels. Or get the same effects from just a few sessions of float tank therapy. These special pools have 800 pounds of magnesium dissolved in them. Looking for a less radical alternative?

How well do you know yourself?

I’ve listened to this episode more than I care to admit. It’s one of the few episodes that’s survived my frequent old podcasts purges. This one deserves undivided attention. I listen to it when I occasionally venture out hiking alone in nature.

Let Go Of Your Story is all about objectively looking at your personal life story you’ve crafted for yourself. These beliefs bound you inside a limited box. Zach covers our obsession with comfort, the trap of labeling yourself resilient (I’m guilty), the deception of individuality, and collective consciousness.

No description does it justice, so you’ll have to listen for yourself.

Zach Bush on Science of Spirituality

The rare intersection of science, religion, spirituality, and everything in between. If you’re in need of a dose of love and wisdom, look no further than these two:

Disclaimer: I am not a virologist, epidemiologist, or doctor. These are merely my notes and not intended to influence your health decisions.

Zach’s gotten his voice out recently. What follows is my summary from his 5+ recent talks on virology, epidemiology, microbiology, and as usual, how humans relate to the environment.

Viruses are misunderstood. They’re minuscule compared to bacteria. And technically they’re not living. They constantly surround us. In fact, you’re breathing them in right now. According to Zach, our atmosphere contains 10^31 viruses suspended in the air. That’s more than the planets in our universe.

There are more viruses floating through the air than grains of sand in the world.

To undertstand the innocence of viruses, you must go back hundreds of years to a debate between two scientists: Louis Pasteur, and Antoine Bechamp. Pasteur argued that specific germs cause disease (what’s now called germ theory). Bechamp, however, theorized that disease comes from imbalance. And viruses only infect compromised hosts. In other words, Bechamp believed that disease only followed an existing state of illness.

You can see Bechamp’s theory in action when only one person out of a group sharing food gets sick. On his deathbed, Pasteur came to realize his mistake:

“The microbe is nothing, the terrain is everything” – Louis Pasteur’s last words (translated)

But the scientific community had already established its model. The one still used by Western medicine today.

This topic is too dense to cover here, and a Google search will reveal a mountain of information on the Pasteur vs Bechamp debate.

An Origin of Viruses

According to Dr. Bush, any microbiome or a multicellular organism produces viruses when stressed. This is especially prevalent in the conventional meat industry where the animals live in atrocious conditions, eat chemical-laden food, and are mercilessly slaughtered (see his video interview on The Highwire).

Sensing extinction, these animals produce rapidly evolving viruses to help them escape danger. It’s a hack that allows species to overcome the snail pace of evolution in grave situations.

But not just slaughterhouse animals.

Each of us generates viral information. Like I wrote about in exosomes and micro-RNA in food, human cells make viruses. And although your bloodstream is full of them, unlike bacteria, they’re not actively searching for food to grow.

“The virus itself has no mortality, it’s our relationship with the environment that induces a toxic event.”

A recent widespread infection struck the world with fear. But these patients don’t present with infection symptoms. Instead of the typical fever, and elevated white blood cell counts, they present with hypoxia (lack of oxygen), lung injury, and blood clots. Classic signs of heavy metal poisoning.

Certain viruses are well known to bind to toxic particulates in the air called PM2.5. Air quality metrics, like AQI, measure the concentration of these toxicants. Dr. Bush matches these symptoms to cyanide poisoning specifically and then draws a novel link between the two. Poisoned red blood cells cannot carry oxygen effectively. Eventually the liver and kidney are damaged by long-term hypoxia and the tragic cytokine storm results.

Zach points out that the Australia wildfires put massive amounts of particulate matter into the air last year. The high levels of air pollution took full effect in the winter once trees lost their carbon sequestering leaves. With rampant pollution and inadequate sequestration, the virus piggybacked onto PM2.5. That’s one explanation for extraordinary incidence in certain regions. If Zach’s right, the California fires this year are increasing the likelihood of another major outbreak next year.

You can find Dr. Zach Bush on all the major tech platforms:

Zach has created an answer to the real threat of Roundup ubiquitous in our food and water. Originally called Restore, Dr. Bush’s formulation has been relabeled as ION Biome. His product protects against glyphosate and heals damaged guts.

Support his work and pick up ION*Biome on Amazon here:

Or donate to his non-profit (Farmer’s Footprint) here: https://farmersfootprint.us/

Lastly, you can sign his petition on rethinking responsible immunity.

Interested in where nutrition comes from? The science of spirituality coming from someone working with end-of-life patients slipping between alive and dead? Why viruses aren’t what you think? How you can actually make a difference to this planet?

His words will have you reflecting on years or even decades of personal experience. For example, I always identified as “resilient”. He pointed out that resilient people need conflict in order to assert their resiliency. They seek out discomfort. But if I’m not resilient… what am I?

Just like every mirror has a blindspot, so do your tightly held ideologies. People that poke holes in your beliefs make you a stronger human. Shed limiting beliefs before they become deeply engrained. Each new hypothesis aligns you closer with objective truth.

I hope you enjoy his content as much as I have. Where do you disagree with Zach?