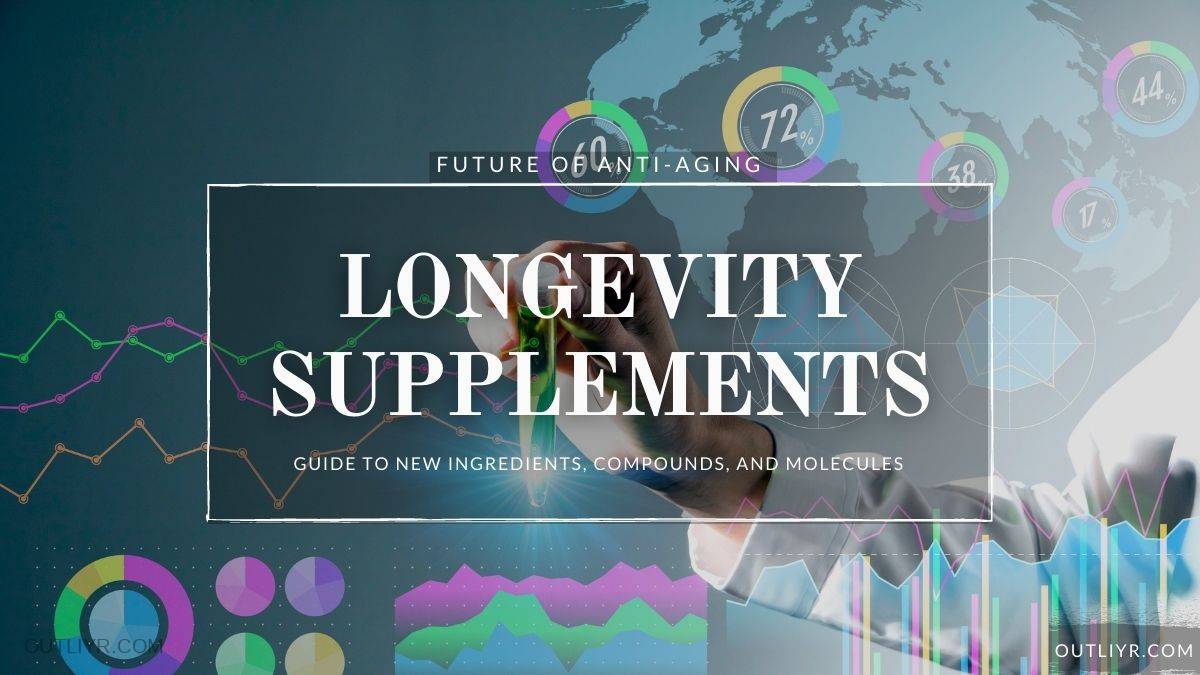 We’re in the middle of war.

Humanity has suffered billions of casualties. Today, however, the tides are changing.

In this post, I’ll cover some of the most promising longevity supplements, ingredients, and molecules of the future. Use this to guide your further research.

Warning: due to the nature of these compounds, this article is for educational purposes only.

Also called Sirolimus, rapamycin is a molecule discovered on Easter Island. It’s primarily used to suppress immunity. Useful for overactive immune systems and to ensure successful transplants. Rapamycin is a “senomorphic”, meaning that it prevents senescent (zombie) cells from releasing inflammatory molecules. Research from the last few years has found that it improves cellular health and thus potentially increases healthspan.

Rapamycin has its issues. For example, it may promote diabetes. And it works by blunting the anabolic mTOR pathway. Blocking mTOR is a bad idea for anyone looking to build muscle.

Rapamycin’s no joke. In the wrong hands or use without close supervision is dangerous.

Metformin, a drug extracted from French Lilac, is a controversial subject in biohacking communities. On one hand, it’s well studied. With its cellular mechanisms showing promise in promoting healthy aging. Metformin’s often viewed as a free pass to binge eat anything without consequence.

Metformin activates the cellular cleanup AMPK pathway but damages mitochondria in the process. That may not be as bad as it sounds. Researchers speculate that the micro-mitochondrial damage results in them regenerating stronger (much like how strength training causes micro-tears in muscle which then grow after rest).

In the USA, it’s prescription only. Better yet, for longevity purposes, I prefer highly-effective natural metformin alternatives. That article also covers the serious drawbacks of off-label Metformin use for anti-aging.

If its name doesn’t give Spermidine’s origin away, it is a natural component of… sperm. Our bodies (male and female) produce only one-third of the spermidine in our body. The rest comes from diet. You’ll get trace amounts from fruits, wheat germ, soybeans, vegetables, meat, and cheese. Perhaps ample dietary spermidine explains the high life expectancy among Asians.

Spermidine research is sparse but growing. With recent studies finding that it:

Interesting in trying it out? Check out this roundup & review of the best spermidine supplements.

David Sinclair popularized NAD with his book Lifespan [Amazon] and interviews on big podcasts. His lab has found incredible full-body healing effects from topping off NAD with one of two main boosters: Nicotinamide Mononucleotide (NMN) and Nicotinamide Riboside (NR). Sinclair believes that the more molecularly-stable NMN supplements are best. But there’s more research on the life-extending properties of NR.

NAD is considered the energy currency of the body. Without it, you’d die within 30-seconds. 500+ processes throughout the body require NAD to function. It declines as we age. As it drops, aging accelerates. Our brain and body become frail. There are two primary ways to increase levels and slow aging:

My article on natural NAD boosters explains cheap (and free) ways to keep levels high. Only then should you move on to the more powerful NR supplements. NMN and NR supplements are effective but expensive.

Epitalon is a synthetic anti-aging peptide identified as a crucial extract of cow pineal glands. It works by activating an enzyme called telomerase. Telomeres are like protective caps that guard your DNA. Self-quantification enthusiasts use telomere testing to quantify their lifestyle changes. To get objective lifestyle scoring from subjective practices.

You can use a genetic analysis tool called SelfDecode to see if your telomerase enzymes are generating enough “protective caps” for your DNA. Check your results for the following:

If you have variants that lead to shorter telomere length, epitalon can be especially valuable.

Essentially, epitalon protects your genes against the normal corruption that occurs as we age. It has quickly become one of the most popular peptides amongst anti-aging enthusiasts. Epitalon also is known to heal the pineal gland from injury or calcification (see other pineal gland health tips here).

It’s very difficult to find, and only available via some of the best peptide vendors online.

An experimental drug short for integrated stress response inhibitor. A 2013 rodent study found that it produced significant nootropic learning and memory enhancement. It’s being investigated as a treatment to reverse the impairments from traumatic brain injury. ISRIB appears to also restore memory in older non-TBI mice.

Best of all, cutting-edge December 2020 research found that it reverses can reverse age-related declines in memory and mental flexibility within days of starting use. Shattering the previously held belief of permanent memory loss.

Another risky compound with potential.

Hands down, the most interesting compound I came across in 2020. 5-Amino-1MQ blocks an enzyme called NNMT, accelerating fat burning. It’s perhaps the ultimate body transformation agent.

The (limited) evidence so far is compelling:

How does this translate into a longer healthspan?

Lean body mass and strength are two of the greatest predictors of longevity.

Despite its long scientific name, 5A1MQ is quite possibly the superhuman compound of the future. Unfortunately, it’s rather difficult and expensive to source. You can buy 5-Amino-1MQ at this shop.

Cannabis has 130+ (and counting) known non-psychoactive compounds that don’t get you high but exert potent health-balancing effects. Today, CBD has beaten out the others as the most popular cannabinoid.

Researchers are in the midst of uncovering the myriad health benefits of others. CBN, CBG, CBC, CBCA, and other cannabinoids can play safe and effective roles in improving a wide range of conditions. For healthy, condition-free folks too. I expect research on this adaptogenic system and therapy to pick up. This is the best hemp/CBD supplement I’ve found.

Astaxanthin, affectionately dubbed “nature’s sunscreen” is the compound giving krill and salmon their reddish flesh. As a supplement, it acts as a potent antioxidant, protecting the brain, nervous system, heart, and mitochondria.

I personally use it to stabilize fish oil (prevent it from aging). Or whenever I expect to spend significant time in the sun.

Most Astaxanthin research comes out of Japan. Could this molecule be their secret to long life? This is one of the top astaxanthin supplements.

Have you heard that red wine is good for you?

Top longevity scientists regularly mention it in their books.

When the minds behind top NR supplement formulas include an unusual ingredient, pay attention.

When your body begins burning body fat, it generates a special type of fuel called ketones. Ketones are like rocket fuel for the brain, supplying hours of clean-burning energy.

Ketones elevate healthy brains to higher levels of performance. Though they’re vital for aged and concussed brains since they cannot effectively burn normal fuel (carbohydrates). When running with limited fuel, the brain diverts energy only to the regions that need it most. The rest shut down.

The body can produce its own ketones from strict carbohydrate avoidance. Special products, however, can accelerate the process (and reduce the agony of the transition period — nicknamed “keto flu”).

One of the oldest and most abundant elements in the universe. H2 is the smallest gas molecule in existence. And it may benefit every cell in your body.

Did you know that some free radicals aren’t bad? They can be important signaling molecules.

Most antioxidants indiscriminately scavenge all free radicals, which comes with unintended side effects. Molecular hydrogen selectively mops up only the toxic free radicals while avoiding the essentials.

Over 1,000 high-impact, peer-reviewed scientific articles and studies support H2 for:

For greater detail, see my guide to molecular hydrogen tablets.

As we age, some of our cells evade cleanup by the immune system. These freeloaders shirk their normal cellular responsibilities while still consuming energy. Sometimes called “zombie cells”, senescent cells accumulate as we age and make us less efficient.

Dasatinib is actually a cancer medication, but with unique properties. It acts as a senolytic; a compound that induces the autophagy cleanup process. For those that cannot exercise or fast, it’s now receiving attention for anti-aging effects.

While far too risky for a good first line of defense, longevity researchers pay close attention to senolytics.

C60, Buckminsterfullerene, or even buckyballs—whatever you call it—is a promising antioxidant with powerful lifespan-lengthening effects in animal studies.

One study found that C60 increased rat lifespan by 90%! Other mouse studies have shown lifespan increases of 5% to 14%. Though, to date, few studies have investigated C60 in humans.

Other benefits of C-60 supplementation include:

Turmeric is India’s original longevity (and flavor) enhancing root. Curcumin is the most heavily researched active ingredient in turmeric, making up 77% of the curcuminoids. Usually, the roots are ground up and powdered. Only then do supplement manufacturers extract curcumin.

Most of the benefits of curcumin come from its anti-inflammatory effects. Considering that inflammation is the root of most disease, this is significant. Some research suggests that it might be as effective as NSAIDs like Tylenol to reduce inflammation. Without nasty side effects.

Where turmeric was an anti-aging Indian staple, the Chinese, Russians, and Scandinavians relied on Rhodiola. Rhodiola is a semi-rare and valuable medicinal plant that grows at high altitudes (up to 2280 m). Only in the arctic and mountainous regions.

While traditionally used as a stress-busting “adaptogen”, more recent research supports what ancient cultures have known for millennia. Rhodiola deserves recognition for its longevity-boosting effects.

The many uses of Rhodiola include:

From athletes to astronauts, some research suggests that Rhodiola mitigates and treats disease, and improves overall health. Even among healthy populations. You can grab high-quality Rhodiola here.

“Aging is a disease.”

The current paradigm is changing.

Classifying aging as a disease will draw massive funding to longevity laboratories across the world. Some of today’s greatest minds are working tirelessly on uncovering anti-aging habits, natural ingredients, and synthetic molecules that will lengthen the quantity and improve the quality of our lives.

You don’t need a $4.5 million laboratory to slow your aging.

Slowing the aging process can be a simple start:

Only then would I consider the fancy longevity supplements and peptides.

Fancy or not, what do you do (or take) to boost your healthspan? Share your top tips in the comments below.

Nick is not a doctor. This site provides research, observation, and opinion. Any information or products discussed are not intended to diagnose, cure, treat or prevent any disease or illness. Nothing on it is to be construed as medical advice or as substitute for medical advice.